It didn’t take long for addled-brain conspiracy theories to bubble up from the primordial Tea-publican ooze following the Boston marathon bombing. There were the instantaneous accusations of Al Qaeda influences before the smoke cleared. Then came the allusions to Obama’s secret Islamic cabal to destroy America. That was followed by NRA freaks who were convinced that the whole thing was staged to trick Americans into abandoning their 2nd Amendment rights. And of course Glenn Beck muscled his way into the lunatic choir with hallucinatory ramblings of a third suspect who is being protected by the President.

Now all of these contenders for the Conspiracy Hall of Lame have to step back and pay tribute to the new frontrunner in the race for the deranged. Cliff Kincaid of Accuracy in Media has concocted a scheme that thrusts him to front of the pack. His hypothesis? It was marijuana what dood it, dude. 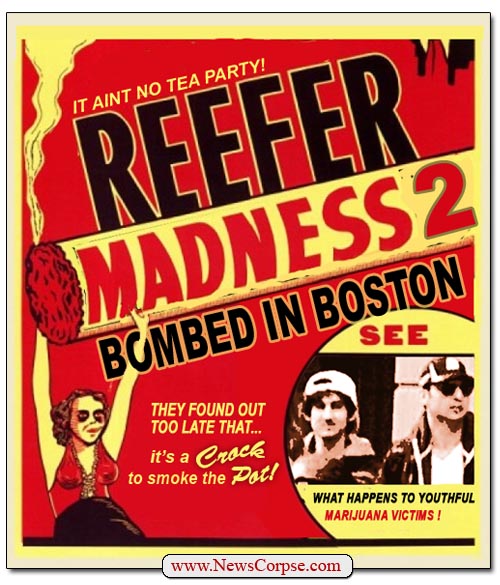 Kincaid unravels a blueprint for destruction that knits together his notion that the Tsarnaev boys were capable of constructing complicated explosive devices, even though they were hobbled by the evil weed’s rotting of their young brain cells. He noted that “The dope aspect of the plot helps explain why they seemed to have no getaway plan.” Nevertheless, Kincaid insists that the doobie brothers were unimpaired when it came to plotting mass murder.

“Left unsaid is the fact that dope’s effect on the brain is what may have led [Dzhokhar] into his brother’s terror activities. He was probably so wasted mentally on drugs that he became easily manipulated by his brother and cannon fodder for the Islamist revolution on American soil.

“What happened in Boston is starting to look like what Bill Ayers and Bernardine Dohrn tried to accomplish with the 1960s generation. Disillusioned young people, brainwashed with illegal mind-altering drugs and armed with weapons, were being taught to hate the American government and the police.”

Wait a minute. I thought hating the American government and fretting about the police state was copyrighted by the Tea Party. Well, anyway…

Perhaps Kincaid did not go far enough into this line of thinking. Who’s to say that the bombing might not have been the result of a weekend of debauchery by a couple of stoners who took one trip too many? They may never have planned an attack at all, but were surprised when the pressure cooker they were using to prepare more munchies suddenly exploded on the way to the 7-11 where they hoped to acquire additional Doritos and salsa. They didn’t plant the devices on the crowded street, they simply forgot where they had left them.

In conclusion, Kincaid spells out how dangerous the happy herb is and how the media conspires to suppress the truth. He specifically cites its power to radicalize weakened blazers both politically and spiritually.

“Marijuana is not the harmless drug the media frequently claim it to be. It is a mind-altering substance that can play a role in creating communist or Islamic terrorists.”

So now marijuana is a tool of both the red menace and the global Caliphate. If I didn’t know better, I’d say Kincaid is nursing a righteous buzz.

3 thoughts on “Reefer Madness 2: Bombed In Boston – How Marijuana Marred The Marathon”