Ratings for the second quarter of 2008 are in and it has ceased to be news that Fox is the slowest growing cable news network:

Far more interesting are the trends that point to long term viewing patterns. While the 25-54 demo is most prized by advertisers, it is not a static metric. As people age they grow into and out of that demographic group. So which networks are poised to benefit over time as audiences mature?

An analysis I did last month showed that only 22% of primetime Fox viewers were in the 25-54 demo, compared to 31% for CNN and 38% for MSNBC. The quarter-end numbers for the first half of 2008 further illustrate the aging of Fox News. In the ranking for cable news networks in the 18-34 demo, MSNBC is first with about 35% more viewers than CNN and Fox who are virtually tied. 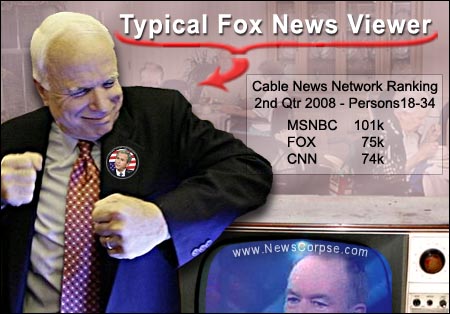 These 18-34 year olds are the next generation of 25-54 year olds, and they are establishing their viewing habits now. At this point in time they are expressing a notable preference for MSNBC’s brand of news and analysis. So while Fox News has been trending down for a couple of years, the composition of the audience is forecasting even more downside for Murdoch & Co.

Fox viewers and John McCain have something in common besides a hard-right leaning network. They are also precisely the same age. What remains to be seen is if the demographic dead weight that is dragging down Fox News will do the same to candidate McCain.

One thought on “Cable News Viewers: The Next Generation”