Last year’s mega-bomb crocumentary, Hating Breitbart, was such a commercial disaster that the producers launched a laughable campaign to get their fan boys/girls to buy extra copies and send them to people who would immediately throw them in the trash. I’m not kidding!

The BreitBrat producers framed this marketing scam as “offering fans of our movie the chance to ‘sponsor’ an intellectually malnourished member of the mainstream establishment.” What a magnanimous offer that doesn’t in any way rip off dimwits for the enrichment of shlock peddlers. It was such a great idea that I borrowed it myself to move copies of my book, Fox Nation vs. Reality.

Today, however, the BreitBrats have taken another step over the line that divides foolishness from insanity. They put out a press release bragging about what a monstrous success their little failure is: “Andrew Breitbart Biodoc Opens At #3; Digital Sales Strong As Movie Opens Across Multiple Platforms.”

The index to which these geniuses are referring is the one that Amazon posts with every product in their store. It is a volatile gauge that changes by the minute and only measures sales on Amazon. Hating Breitbart may have been at #3 at some point, but it was short-lived and probably the result of a spike from the producers buying copies themselves. At this writing it sits at #13.

For comparison, my book is presently at #9 in Amazon’s Political Advocacy category. But a few days ago it was at #2. Tomorrow it could be #22 or #4, all depending on how it sells in relation to how everything else on Amazon sells. 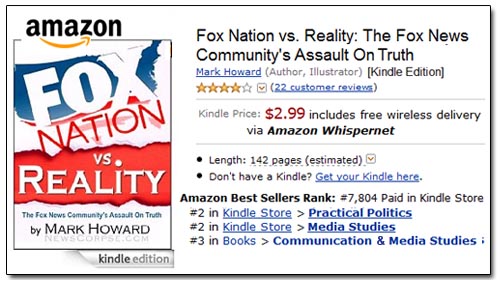 The press release goes on to celebrate what they call “a national theatrical release,” with numbers they boast are “pleasing.” But there is no evidence that such a release has occurred. There are no independent box office tallies. And they don’t bother to list any venues or ticket sales data in the release. I’m afraid that, like their Amazon hype, this is all in their heads. Or perhaps they just put together a nationwide exhibition of the film in the living rooms of Tea Partiers where they could include a scrumptious pot luck feast. Then, they could Tupperware-style push more copies of the DVD to gullible viewers.

Most producers sitting on a major flop would try not to attract more attention to their failure. But it seems somehow appropriate that the producers of a film about a loudmouth propagandist would continue shouting even after their project has hit the bottom of the barrel.

One thought on “Hating Breitbart: Producers Think Their Flop Is A Hit”