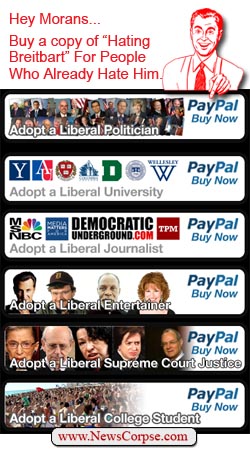 Earlier this week News Corpse reported that the desperate producers of the crocumentary “Hating Breitbart” had embarked on a program to convince their fans to buy multiple copies of the DVD and send them to liberal politicians, journalists, actors, etc. We regarded this idea as a hilarious and transparent ploy to salvage their failed film and we set about to mocking it. As I wrote last Tuesday…

“The producers must be stuck with a warehouse of these paperweights and believe that their fans are dumb enough to bail them out by buying more. […] Wouldn’t it just be easier to double the price and tell them the proceeds are going to Jesus?”

Well, I may have spoken too soon. After marathon conferences with our marketing executives and promotion consultants, we at News Corpse have determined that this sort of sales methodology has the potential to enhance the commercial prospects of our own already successful ebook “Fox Nation vs. Reality.” So today we are launching a version of the “Adopt A Wingnut” program that enables our enlightened audience to spread some of the truth and insight developed here to the community of deluded Fox Zombies who need it most. It’s a simple 3-step plan that everyone can join in on.

If you have not already purchased a copy of Fox Nation vs. Reality, do so immediately. It is an amusing and informative expose of the most brazenly dishonest efforts by Fox News to deceive their gullible fans.

Buy another copy of Fox Nation vs. Reality for an unfortunate friend or family member whose thinking has been clouded by the disinformation served up by Fox News. You can also buy copies for politicians, journalists, actors, teachers, professional colleagues, climate science deniers, Tea Partiers, bible thumpers, you name it. Be creative. Amazon makes it easy for you to designate the purchase as a gift and send the gift notice to the recipient.

Repeat Step Two as many times as necessary to complete your own list of needy neo-cons, theo-cons, and just plain cons (or until there is world peace and an end to hunger, whichever comes first).

Through this generous initiative we can have a real impact on the destructive propaganda that emanates from Fox News. The power of the human attributes of charity combined with effective social media can change the world and you can be a part of it. This is not some pipe dream cooked up by naive optimists. A check on Amazon today shows that Fox Nation vs. Reality is already ranking higher in sales than Breitbart’s autobiography, Righteous Indignation 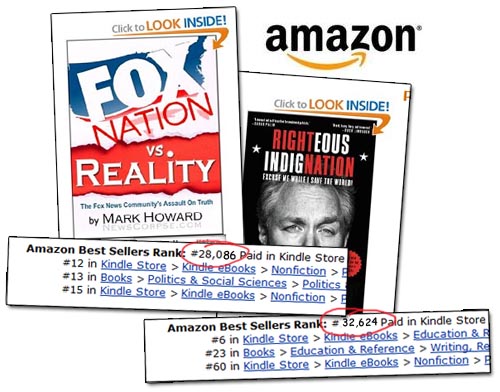 It is time to stand up and be counted. It is time to take positive steps toward a better world. It is time to lend a hand to the less fortunate. Just think about how badly these poor souls need the nourishment of honesty and truth. And try to imagine how much more compassionate and rational our world will be when we have eradicated the ignorance and hostility that is emblematic of the righteous-wing of the American political spectrum.

This is a moral crusade and it needs your participation to succeed. I know I can count on you. And as always, thanks for your dedication and benevolence. Your purchases will help News Corpse to continue to bring you the best in media analysis, conservative smackdowns, and political humor and art.

2 thoughts on “Adopt A Wingnut: Buy A Copy Of ‘Fox Nation vs. Reality’ For Your Favorite FoxPod”