If you happened to be looking for another reason to be grateful that Allen West was booted from congress, you just got your wish.

West sent an email to his Batshit Brigade seeking money to fund his struggling Super PAC, The Allen West Guardian Fund. Apparently desperate to make an impression on the radical dimwits that make up his fan base, West chose to send a message that is one of the most disgusting expressions of anti-American hogwash since Osama Bin Laden’s “Death to America” video collection. 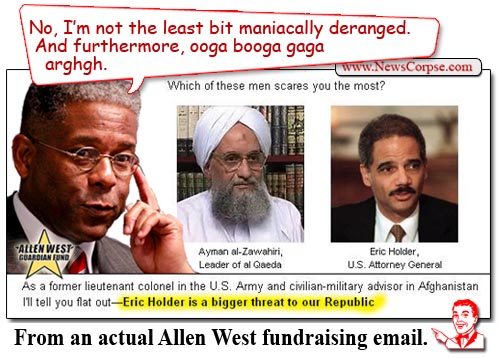 The email featured photos of current Al Qaeda boss Ayman al-Zawahiri and U.S. Attorney General Eric Holder with the question “Which of these men scares you the most?” West supplies his own answer saying: “I’ll tell you flat out — Eric Holder is a bigger threat to our Republic.”

The implications of that repulsive statement are unambiguous and far-reaching. Zawahiri is an international terrorist fugitive who is responsible for the deaths of more than 3,000 people on September 11, 2001, and many thousands more before and after that infamous date. If found he would instantly be captured or killed, and if taken into custody would very likely be tried and executed for crimes against humanity.

So obviously West regards Holder, an American patriot who has spent nearly his whole professional life in the service of his country, as somehow comparable to an Al Qaeda mass murderer. And if Zawahiri is fit for a death sentence, then what is West proposing for Holder whom he thinks is even worse.

West, you may recall, has a somewhat less respectable biography. He was kicked out of the Army just prior to being court-martialed for torturing an innocent Iraqi held in his custody. He went on in his single term in congress to falsely accuse the entire Progressive caucus of the House of Representatives of being card-carrying communists. He also likened the Democratic Party to Nazis and plantation masters who want to enslave American citizens. He baselessly asserted that there is a “stealth jihad” of our defense, financial, cultural, religious, and political systems.

The acute delusional paranoia exhibited by West should be considered a cry for help. West’s mental health is sinking like a rock tied to piano. And now he accelerates his downward spiral by disparaging a loyal American serving his country as being worse than the Al Qaeda monsters who are committed to our country’s destruction.

This is typically psychotic behavior from West, and it is unacceptable in the course of rational political debate in a democracy. However, it is apparently acceptable to employ someone like West as a commentator on a national news network. West articulates precisely the sort of hair-brained hostility and crackpot rage that Fox News was created to disseminate. 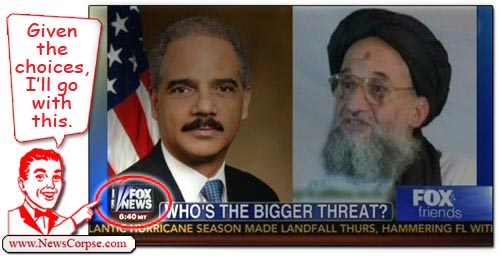