The Tea Party movement has never been confused with Mensa, the high IQ society. In fact, there have been numerous studies that rank Tea Partiers at the bottom of the intellectual scale, particularly those recently elected to congress. As a group they dismiss the findings of science on matters as diverse as climate change and evolution. And they are skeptical of academics and Ivy Leaguers whom they regard as out-of-touch elitists.

So it is in keeping with their aversion to education that they are now leading the fight against a set of teaching principles developed to insure that K-12 students are prepared to enter college. And predictably, Fox News is only too happy to advance their crusade for national ignorance. 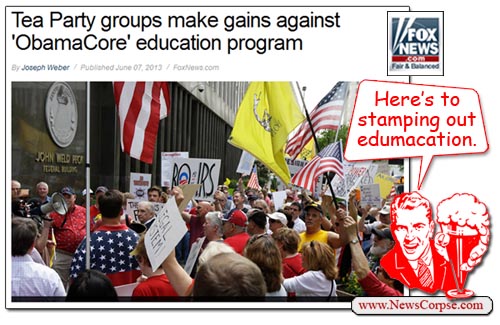 The target of the Teabaggers’ ire is a program called “Common Core State Standards,” a bipartisan project endorsed by the National Governors Association and the Council of Chief State School Officers. Notice that both organizations are state-based reflecting the focus on local development and implementation.

Nevertheless, right-wingers are enraged by baseless allegations that this is just another federal boot on the throats of sovereign statehood. Not only is there no evidence to support such charges, the facts explicitly reject them. This is easily discovered with a little research, something these Teabaggers would be able to do if they were better educated. The web site for Common Core clearly rebuts their imaginary fears on a page debunking the myths:

Myth: These Standards amount to a national curriculum for our schools.
Fact: The Standards are not a curriculum. They are a clear set of shared goals and expectations for what knowledge and skills will help our students succeed. Local teachers, principals, superintendents and others will decide how the standards are to be met. Teachers will continue to devise lesson plans and tailor instruction to the individual needs of the students in their classrooms.

On another page of questions and answers about the program, concerns about its management and paranoia related to records are put to rest:

Q: Does the federal government play a role in standards implementation?
A: The federal government had no role in the development of the Common Core State Standards and will not have a role in their implementation. The Common Core State Standards Initiative is a state-led effort that is not part of No Child Left Behind and adoption of the standards is in no way mandatory.

Well then, that should settle the matter. And if you think it does, then you don’t know how severely delusional these conservative conspiracy freaks are. Glenn Beck has called this the most important story in history. He has resolved to keep his children from attending college in order to avoid being “marked” by the system that he says is “scary.” He sermonized at length about it on his video blog, warning his disciples that…

“We have, I think, about twelve months to get Common Core out of our system. Our goal should be by the time school starts in the fall of 2014, it’s completely dead. That’s my goal.”

But it isn’t just conspiracy theory peddlers like Beck (and Alex Jones, and Michelle Malkin) who are panicking over the terrifying prospect of our children getting smarter. Nine U.S. senators, including Chuck Grassley, James Inhofe, Rand Paul, and Ted Cruz, composed a strongly worded letter in opposition to Common Core. And the Republican National Committee has taken an official stance (pdf) against it.

Hoping to ignite another fake controversy, Fox News is joining ranks of the anti-education brigades. They dubbed Common Core “ObamaCore” in an attempt to generate the instant animus that their audience has for the President. Ironically, the practice of attaching the Obama prefix to various legislation has actually resulted in Obama getting extra credit for programs that have considerable popularity. Confirmation of the bipartisan support for Common Core is the enthusiastic backing of GOP governors including Jeb Bush and Mike Huckabee. The plan has already been adopted in 45 states, with only the wingnut utopias of Alaska, Nebraska, Texas, and Virginia, lagging behind.

In a peculiar bit of hypocrisy, Rupert Murdoch’s Wall Street Journal published an editorial in support of Common Core that was co-authored by Joel Klein, a former New York City schools chancellor who now runs Murdoch’s education subsidiary, Amplify. Suffice to say that their motives may not be purely altruistic. Amplify is an education technology provider that stands to profit from government academic programs.

The coordinated effort to suppress education has received the help of the Koch brothers-funded FreedomWorks and Americans for Prosperity, the ultra-rightist Eagle Forum, the pseudo-libertarian Heritage Foundation, the repugnant John Birch Society, the racists at Stormfront, and now Fox News is tying together all the loose ends. And why wouldn’t they. Their own legacy for advancing ignorance is well documented.