This didn’t take long. Just a few hours after President Obama announced his selection of Samantha Power to succeed Susan Rice as U.S. Ambassador to the United Nations, Fox News has already hauled out the Nazi references that they just can’t seem to hold in. 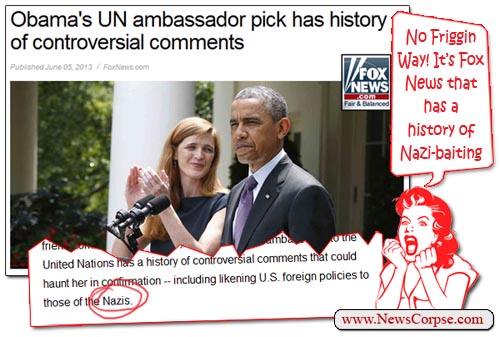 Get the acclaimed ebook Fox Nation vs. Reality at Amazon.com

As comedian Lewis Black once said of Glenn Beck, another Nazi talk junkie, they have Nazi Tourettes Syndrome – a malady that manifests itself with the uncontrollable compulsion to shout “Nazi” at everyone associated with Obama or any other Democrat or liberal. And shortly after the President’s morning announcement Fox had another seizure:

“The former White House adviser and longtime Obama friend nominated Wednesday as the next U.S. ambassador to the United Nations has a history of controversial comments that could haunt her in confirmation — including likening U.S. foreign policies to those of the Nazis.”

That was the very first paragraph of the Fox News article about Power’s appointment. There was no introductory information, no biography, nothing setting up the circumstances of her nomination. Fox went straight to the Nazi talk so as not to waste any time disparaging Power or confusing people with her exemplary resume.

Of course, Fox’s allegation is entirely false. It is pure fiction that they never even bother to support with any facts. At no time does Fox cite a U.S. foreign policy that Power allegedly likened to those of the Nazis. Fox doesn’t even offer some vague reference that they attribute to Power that might be misconstrued as likening U.S. policies in general to Nazi policies. This is a smear invented wholly in the diseased mind of Fox News.

The sole, and very tenuous, link that Fox cites is from a magazine article Power wrote in 2003, where she mentioned the famous incident in 1970 when then-German Chancellor Willy Brandt knelt at the monument to the victims of the Warsaw Ghetto uprising who were slaughtered by Nazi troops. In her article Power described the moment as expressing the remorse of contemporary Germans who “do not endorse the sins of their predecessors.” She further wrote that “his gesture was gratifying to World War II survivors, but it was also ennobling and cathartic for Germany.” Power was merely relating a very positive historical precedent when the Germany of 1970 affirmed its sorrow for the atrocities committed a quarter of a century prior.

That is the source for Fox’s repulsive attack on Power. And you can be certain that having introduced this insult, Fox and a bevy of right-wing slanderers will attempt to spread it throughout the conservative mediasphere. It matters not to them that there is no truth to it. The only thing that matters is that they have a rhetorical club with which to beat their enemies.

It also doesn’t matter that Power is an eminently qualified and capable nominee to represent the U.S. at the U.N. She is a Harvard law graduate, a Pulitzer Prize winner, and a fierce defender of human rights. She also has the honor of being called the “most dangerous woman in America” by Glenn Beck. That charge was one Beck repeated frequently when he was still on Fox News. Like much of his conspiracy-related dementia, it is difficult to unravel. But it had something to do with her being married to a long-time Beck foe, Cass Sunstein, as well as her support for a U.N. policy against genocide known as “Responsibility to Protect.” I wrote about this back in 2011:

The thrust of Beck’s squabbling is his contention that Power is the source of the administration’s policy in Libya. In his pseudo-professorial style Beck mis-educates his gullible viewers as to the roots of the “Responsibility to Protect” (R2P) initiative endorsed by the United Nations. R2P sprung from the post-WWII determination that the community of nations are morally obligated to act in opposition to genocide, crimes against humanity, ethnic cleansing, and war crimes.

In short, Beck falsely asserts that the UN got the idea from George Soros who got it from Power’s book, “A Problem from Hell.” The only flaw in that theory is that Power’s book (which, by the way, won the Pulitzer Prize) came out the year following the publication of a UN commissioned report on the subject, so it could not possibly have been the inspiration for it. And the UN’s report was based on the 1948 “Convention on the Prevention and Punishment of the Crime of Genocide,” when Soros was a poor, eighteen year old Holocaust refugee and student in London, and well before Power was even born. Also notable is the fact that R2P was adopted when John Bolton was the ambassador to the UN and both Israel and the Bush administration supported it.

The fact that Fox was able to manufacture a phony Nazi smear so rapidly is evidence of how seriously disturbed they are. Only a sick mind(s) could find so many paranoid examples of shadowy enemies lurking virtually everywhere. And as I have noted before, the Nazi talk on Fox News starts at the top with Roger Ailes. It is clearly a critical part of their business model. And despite having received numerous condemnations from Jewish organizations and other groups that fight anti-Semitism, Fox persists with their disgraceful behavior.