The folks at Fox Nation must be getting pretty desperate for any slime to fling Obama’s way. Clearly the parade of phony scandals has failed to convince the President to resign and join a Muslim monastery, so they are grasping for ever shorter straws in an effort to break Obama’s back.

Today the Fox Nationalists reported that an “Impeach Obama” rally in Southern California organized by confirmed birther had snarled traffic for 10 miles. 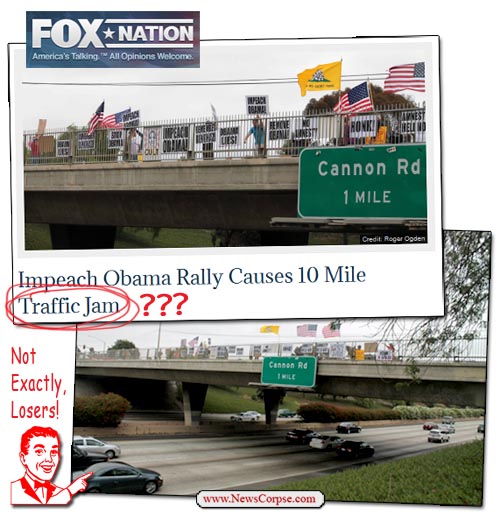 Get the acclaimed ebook “Fox Nation vs. Reality” at Amazon.com

First of all, anyone who has ever driven in Southern California knows that there are very few 10 mile stretches of highway that are not snarled at almost any time of day. That said, the particular claim in this case was easily disproved by photos supplied by the source for the story. One glance shows that traffic was moving fairly well. It also shows that the rally was a pathetic affair that brought out only six or seven nutcases who were unable to articulate an actual reason to impeach the President. Their signs carried unrelated messages concerning Benghazi, immigration, guns, and something about cults. This also further confirms earlier reports that these Teabaggers have not gained any ground in the wake of recent political melodramas.

The organizer was long-time birther, Roger Ogden. He has been advocating for Obama’s impeachment for years. He continues to believe that the birth certificate the White House posted was a fake. He also defends comparing Obama to Hitler and the Nazis. I’m not sure whether Ogden is a LaRouche follower, but there was at least one LaRouche sign at the rally.

I don’t particularly care what a loser like Ogden does on his spare Saturday mornings, but the fact that Fox News saw fit to feature this non-event on their web site says something about how frantic they are to invent a new controversy. But what made them think that a lame handful of wingnuts on a freeway overpass would have a better chance of stirring up trouble than the pseudo-scandals that have already flopped, I’ll never know.