When a member of the Wall Street Journal’s editorial board speaks out about the imminent threat to America’s freedom posed by subversive bike riders, you sure hope that somebody is listening and is prepared to act. Thank God for Stephen Colbert. 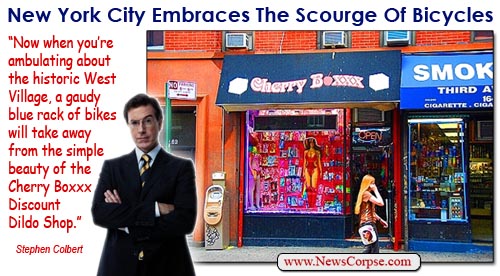 The Journal’s Dorothy Rabinowitz took to the airwaves to warn America about the these vile bicyclistas and the government stooges who enable them. While she declined to speculate on what is in “the mind of the totalitarians running this government,” she pointed out that…

“We now look at a city whose best neighborhoods are absolutely…“begrimed” is the word…by these blazing blue Citibank bikes.”

Exactly! It’s an abomination that must not be tolerated by freedom-loving patriots. Colbert quickly recognized the wisdom in Rabinowitz’s criticism and leaped to her defense. He astutely noted that nothing begrimes a community more than a row of two-wheeled, people-powered, vehicles that eschew the fossil fuel that is the blood coursing through America’s oily veins. Colbert lamented what would become of our neighborhoods if the bicyclistas get their way:

Well said. That’s the way to stand up to these peddle-pushers who, like their comrades in the drug trade, are determined to make us all slaves to a perverse and anti-American lifestyle “choice.” And it’s only a matter of time before the bi-cycle Mafia slides down that slippery slope and openly advocates gay-cycle decadence that will rip apart the fabric of our culture.

Watch the video and prepare to be outraged.