John McCain has made Barack Obama’s alleged elitism a centerpiece of his campaign. In virtually every stop of the Doubletalk Express, McCain finds an opportunity to impugn Obama as out of touch with ordinary Americans. The press uncritically regurgitates this nonsense without even a hint of irony. They portray the wealthy McCain as an authentic man of the people despite the fact that the opposite is true.

Haven’t they noticed that it is McCain who is the son of privilege? His father and his grandfather were both Admirals. He left his first wife to marry a beer heiress worth more than $100 million. And he has lived off of the American people his whole life – first as a Naval officer, then as a Senator. Obama, on the other hand, is the son of a single mother. He worked his way through college and law school, and then eschewed the lucrative legal firms to dedicate himself to community service in South Chicago.

So how will the media handle the news that McCain has been caught gallivanting around the country in $520.00 imported Italian Ferragamo loafers? 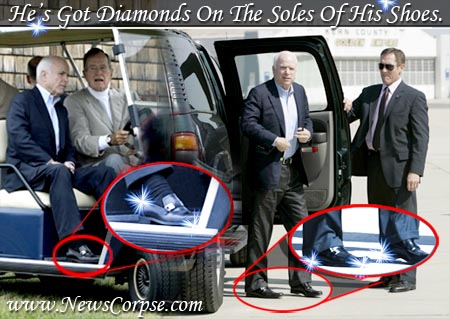 McCain has upped the ante on Edwards’ haircut by $120.00. Plus, he has eight homes and a private jet. Does O’Reilly disrespect him or consider him a phony? Edwards and Obama share the experience of having had to work hard for their good fortune. McCain was born into privilege, and then marriage enriched him further.

The press really needs to be made to answer for their hypocrisy. What excuse could they have for the disparity in the coverage of these candidates? The reality is so obvious that the media cannot feign ignorance. It is past the time for excuses and neglect. It is time to force the media to be honest.