This is the fifth time that the Fox Nation has declared a “victory” on their web site that is not attributable to Fox Nation nor even a victory:

Quoting me: Fox Nation has decided to make a habit of these “Mission Accomplished” moments. That stance in and of itself is evidence of Fox’s bias. They have ceased to even pretend to be a neutral news enterprise. They are now openly admitting that they have a stake in the outcomes of political affairs. And when they think their side has won, they won’t hesitate to declare victory and commence a celebration. 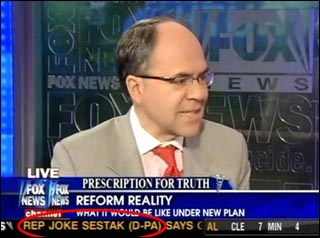 In addition to this overt display of bias, Fox News broadcast another episode of its long-running series of chyron “bloopers.” Normally they are satisfied with merely misidentifying the party affiliation of politicians. In almost every case the error reflects badly on Democrats. But on this occasion they have stepped up their game. By mislabeling Joe Sestak as Joke Sestak, Fox News is blatantly insulting a Democratic congressman and candidate for the Senate. I guess the next step will be to attach devil horns to the the top of every Democrat’s head and replace the audio with commie radio broadcasts.

For the third time Fox Nation is declaring victory. For the third time they have done nothing for which they can claim any credit. And, as usual, there is no evidence that the victory they claim actually occurred.

Fox Nation has decided to make a habit of these “Mission Accomplished” moments. That stance in and of itself is evidence of Fox’s bias. They have ceased to even pretend to be a neutral news enterprise. They are now openly admitting that they have a stake in the outcomes of political affairs. And when they think their side has won, they won’t hesitate to declare victory and commence a celebration.

In yet another example of the Fox Nation’s embarrassing unprofessionalism and arrogance, they are once again claiming victory for something they had absolutely nothing to do with. On this occasion they are suffering from the delusion that they are responsible for CNN not renewing the contract of reporter Susan Roesgen.

In last April’s Tea Parties, Roesgen confronted a teabagger who was blathering incoherently about Obama being a fascist. The crowd became increasingly hostile making it impossible to continue the segment. She eventually signed off saying that…

“I think you get the general tenor of this. It’s anti-government, anti-CNN, since this is highly promoted by the right-wing conservative network, Fox.”

The encounter drew criticism from right-wing blogizens who pounced on her for daring to tell the truth about Fox News. In all honesty, I feel that Roesgen did cross a line by appearing to be confrontational. It is appropriate for her to challenge a subject, but not to become emotionally connected. However, it is exceedingly hypocritical for FoxPods to complain so bitterly about Roesgen’s alleged bias without ever acknowledging the far greater bias exercised by Fox News. Remember, Fox correspondents were actually participating in the Tea Parties as promoters and even hosts.

Nevertheless, Fox’s declaration of victory is hysterical. First of all, there is nothing to suggest that Fox deserved any credit whatsoever for this personnel decision by CNN. They don’t even offer any evidence that Roesgen’s separation from CNN had anything to do with the Tea Bag affair. In case they haven’t noticed, lots of people at all networks have succumbed to downsizing in recent months due solely to market conditions.

While Roesgen could have conducted herself better, her actions did not merit termination. So the fact that so many rightists on sites like Fox Nation and TVNewser are so giddy upon hearing this news is revealing. After all, none of them were calling for Glenn Beck’s head when he agreed with his guest that “the only chance we have as a country right now is for Osama bin Laden to deploy and detonate a major weapon in the United States.” Apparently, to conservatives, it is a worse offense to take a clumsy rhetorical swipe at a competitor than it is to advocate terrorist attacks against America.

Less than a week ago, Fox Nation triumphantly declared that they were the victors over President Obama because a climate change bill had been delayed. In that case as well, Fox had nothing to do with it and it wasn’t much a victory because the delay was temporary and had no material effect on the bill’s progress.

It appears that Fox Nation is going to make a habit of these “Mission Accomplished” moments. That stance in and of itself is evidence of Fox’s bias. They have ceased to even pretend to be a neutral news enterprise. They are now openly admitting that they have a stake in the outcomes of political affairs. And when they think their side has won, they won’t hesitate to declare victory and commence a celebration.

From the start, the Fox Nation presented itself as a community intended to reflect “your values, your voice.” In its official Statement of Purpose they claim that…

“The Fox Nation is for those committed to the core principles of tolerance, open debate, civil discourse–and fair and balanced coverage of the news.”

And from the start, that has been a lie. The brazenly partisan web site has never bothered to uphold even a pretense of tolerance, open debate, or civil discourse. A brief venture into the comments posted on their overtly biased news items exposes a population consumed with hostility and a bitter disgust for government and the democratic process they profess to revere.

Displayed on the site’s featured stories today is headline that goes farther than ever to reveal the true role that Fox Nation was created to play. The role, not of a fair and balanced source for news, but of an advocate for a far-right agenda and an opponent of the progressive policies and values for which the American people just voted. The headline reads “FOX Nation Victory! Obama’s Drive for Climate Change Bill Delayed!”

The obvious bias expressed in this item destroys any pretense of neutrality. What’s more, it arrogantly assigns to itself the credit for this alleged victory. Fox Nation appears to believe that they are responsible for the legislative delay that they herald as a triumph. They fail, however, to offer any evidence for why they deserve to share in this pseudo-glory. This should put an end to any debate as to whether Fox is pursuing its own ends. It should, but it won’t. Fox defenders, blinded by dementia, will undoubtedly continue to insist that Fox is merely a counterweight to the rest of the media that they falsely regard as liberal.

To compound the absurdity of this item, the article linked to the headline is a story in the Washington Post that merely describes a delay due to the fullness of the Senate calendar. The Senate is busy with its top priority, the healthcare bill, and Sen. Barbara Boxer, the chair of the Environment and Public Works Committee, insists that the Climate Change bill will be addressed when the Senate returns from its August break. In other words, there is no “victory” in any legislative sense. The bill is moving forward in a relatively routine fashion.

So while the Fox Nation swaggers before its Mission Accomplished banner, the only real victory they have achieved is the unmasking of their deceit and their intent to manipulate public opinion. Now that is a cause to celebrate.