The campaign to discredit the media has been a prominent part of Donald Trump’s mission for several months. He is an avowed foe of the First Amendment’s guarantee of freedom of the press. He said that the media is “the enemy of the American people,” and has called for revoking the licenses of press organizations he doesn’t like. Setting aside the fact that he has no power to do that, just the desire exposes his dangerously tyrannical aspirations. 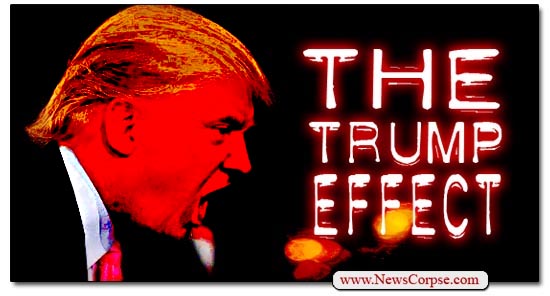 By attacking the press so relentlessly, and without foundation, Trump has demonstrated that his words have an impact on the glassy-eyed disciples who worship him. Forty-six percent of Republicans now agree with Trump that he should be allowed to shut down any media that isn’t unquestioningly adoring. That’s the effect a loudmouthed wannabe dictator can have on the gullible masses.

However, this presages an even a bigger and more ominous problem. Politico has aggregated some of the evidence that Trump’s suppressive rhetoric is capable of damaging freedom of speech and the press around the world. The article quotes numerous foreign leaders with authoritarian tendencies adopting Trump’s anti-media philosophy. They are joining in the chant of “fake news” to demean any criticism they receive from the press. For instance:

All of these adopters of Trump’s “fake news” language are notoriously oppressive leaders known for their mistreatment of the media. Their tactics include threats, imprisonment, and even assassination. The article also highlights Libya’s reference to Trump to dismiss reports about their slave trade. And of course Russian media has taken to labeling stories they dispute with a big red “Fake News” stamp.

Trump may not be having much of an impact on Americans, who continue to oppose him and his policies by large majorities. But internationally, the world’s worst tyrants are finding comfort in the words of America’s anti-media president. And they are following his example in order to embark on a reign of terror against journalists and journalism.

Poor Fox News has suffered greatly in the past year or two. They launched the #MeToo movement when their CEO, Roger Ailes, was fired for sexual harassment and abuse. Then their biggest star, Bill O’Reilly, was terminated for the same reason. Their primetime schedule was thrown into chaos with the departure of O’Reilly and Megyn Kelly, who left partly due to harassment by Ailes. 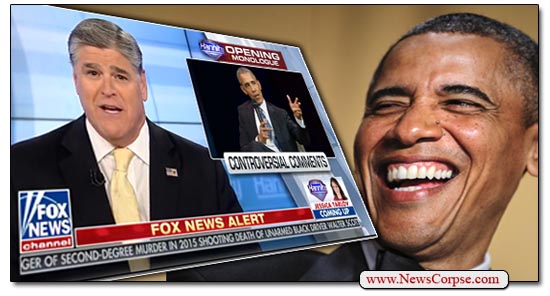 Consequently, the current primetime roster for Fox News depends on newcomer Laura Ingraham (who is regularly beaten by MSNBC’s Lawrence O’Donnell), Tucker Carlson (who has been fired from every other cable news network), and the excruciatingly annoying Trump-fluffer, Sean Hannity (who was moved into the time slot opposite Rachel Maddow and quickly descended to second place).

Hannity is an unabashed sycophant for Donald Trump, even to the point that he has bitterly renounced the Republican Party in favor of his reality TV cult leader. He will defend Trump for any and all criticism, no matter how definitive the facts against the President. And he will attack Trump’s foes with a fury that is beyond hysterical. Which is precisely what he did on Thursday’s program when he went after President Obama:

“No class Barack Obama back again. What is he doing? Launching a new, far left attack against President Trump warning that America could turn into Nazi Germany.”

Indeed. Obama did articulate such a warning, and with good cause. He told an economic conference in Chicago that:

“[The danger is to] grow complacent. We have to tend to this garden of democracy or else things could fall apart quickly. That’s what happened in Germany in the 1930s, which despite the democracy of the Wiemar Republic, and centuries of high level cultural and scientific achievements, Adolf Hitler rose to dominate…Sixty million people died. So you’ve gotta pay attention. And vote.”

It’s difficult to figure out what Hannity objects to in those remarks. Vigilance in the defense of democracy has always been considered patriotic. And Hannity is often the first to accuse Democrats, including Obama, of radical political extremism. Even Trump has invoked the risk of rising totalitarianism, although his warnings were baseless and delusional:

Intelligence agencies should never have allowed this fake news to "leak" into the public. One last shot at me.Are we living in Nazi Germany?

Note that Obama’s warning was generalized to refer to a broad slate of potential risks, while Trump was attacking his own law enforcement apparatus. Hannity continued his tirade by engaging in accusations that far exceed what he is accusing Obama of:

“Very cute, very clever comparing the president in a subtle way to Hitler and Nazis. Obama, by the way, how are your unrepentant domestic terrorist buddies Bill Ayers and Bernadine Dohrn doing? Oh and by the way, please send our best wishes to the “Church of GD America” and the Reverend Jeremiah Wright. Now the former president is obviously sick, pathetic, and twisted in this obsession with President Trump. He’s kind of like everybody in the media.”

By bringing up fake allegations against Obama that date back nearly a decade, Hannity proves that he has completely run out of tricks from his anti-Obama playbook. But calling Obama sick, pathetic, twisted, and obsessed, is classic projection. It’s actually Hannity who is sick, pathetic, twisted, and obsessed with an unnatural infatuation for Donald Trump. His program is 100% state-run TV propaganda. But his sagging ratings and fleeing advertisers are proof that this strategy is failing. Meanwhile, Stop Hannity movement continues to gain momentum.