It’s finally the Eve of a holiday that America was prohibited from celebrating until the election of Donald Trump – at least in his cartoon brain. And instead of reflecting on the joyous themes of the occasion, the President is pontificating on Twitter about how underappreciated he is by the media that despises. 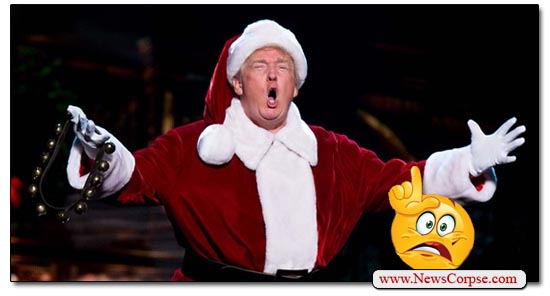 Being able to say “Merry Christmas” again is one of the victories that Trump repeatedly embraces as a source of personal pride. He fails to mention who was preventing him from saying it before, and most Americans are perfectly happy saying “Happy Holidays.” But he doesn’t seem to be wrapped in seasonal bliss as he persists in attacking the media for not being sufficiently adoring:

The Fake News refuses to talk about how Big and how Strong our BASE is. They show Fake Polls just like they report Fake News. Despite only negative reporting, we are doing well – nobody is going to beat us. MAKE AMERICA GREAT AGAIN!

The fake polls that Trump is referring to are pretty much every poll. Trump’s approval rating has achieved a milestone that is surely going to spoil his Christmas gala at Mar-A-Lago. He is officially the most disliked president ever. His thirty-five percent approval isn’t even close to the next lowest rating of forty-nine percent (Ronald Reagan). And it must really hurt that he’s nineteen points behind his arch enemies Barack Obama and Bill Clinton.

Trump’s lame attempt to dismiss this epic rejection is kind of sad. All he can say is his now tedious repetition of “fake news.” But he has to know that isn’t the case. Particularly when Fox News is among those reporting record low numbers for Trump. Even his favorite – and reliably biased – pollster, Rassmussen has him at a dismal forty-four percent, which still puts him at the bottom of the pile.

Trump whines that he is getting “only negative reporting.” In fact, he is getting accurate reporting of his presidency which has only produced negative results. That’s not the media’s fault. And it’s telling that he tags his campaign slogan onto the end of this ego-driven rant as if his polling numbers were synonymous with America’s greatness. Actually, they are. They indicate that most Americans recognize what a failure he is. And that truly is something that makes America great.