This weekend Donald Trump was busily engaged in what he seems to think is job as president: Posting embarrassing, ignorant, and untrue comments on Twitter. He spends more time tweeting and golfing than he does governing, which is actually to the benefit of the nation and the world. We are all better off with him on the golf course than in the Oval Office where he does real harm.

Nevertheless, his obsessive twittering often leads to domestic and international crises stemming from his utter lack of knowledge and decency. The main thrust of his comments generally hit on two main subject areas: Bragging about himself and his imaginary achievements; or childish insults directed at his perceived enemies and the media. And Sunday was no exception when Trump disgorged this deranged bit of rage:

Very little discussion of all the purposely false and defamatory stories put out this week by the Fake News Media. They are out of control – correct reporting means nothing to them. Major lies written, then forced to be withdrawn after they are exposed…a stain on America!

That’s a hefty barrel of bullshit that requires a detailed rebuttal. Let’s start with his lament that the media is “out of control.” That’s actually a good thing. It isn’t supposed to be under control, especially by wannabe dictators like Trump who advocate for the suppression of the free press.

The rest of his tweet is weighted down by obvious lies. First of all, there was plenty of discussion of media errors on all of the weekend news shows. For someone who watches four to eight hours of TV a day, he has abysmal comprehension and retention skills. [Note: Trump predictably disputed reports of his television habits in a tweet Monday morning]. Secondly, contrary to Trump’s blind outburst, there were several corrections made when legitimate errors were discovered. That’s something Trump never does for the literally thousands of lies he spews. And his characterization of the errors as being “purposely false” is unfounded and slanderous.

Shortly after Trump’s Twitter tantrum, Fox News came to his aid, as usual, with a story atop their website. The headline blared out “‘Stain on America!’ Trump denounces ‘Fake News Media’ after string of major reporting errors exposed.” You have to wonder why Fox News thinks that Trump denouncing the media is news after all these months. It’s actually so common it’s becoming tedious. But it’s the visual presentation of this story that stands out. It clearly wasn’t thought through very carefully, resulting in this unintentionally accurate image: 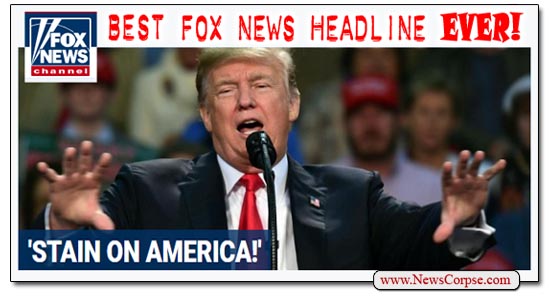 Well done, Fox News. The story itself, however, was terribly done. It enumerated a few minor mistakes by media outlets that Trump famously despises. But the story completely left out any mention of Fox’s own blunders, which were far worse and deliberate.

For instance, Fox News had to correct a story that falsely accused a Roy Moore victim of forgery. A week earlier they deleted and apologized for saying that MSNBC had not reported on the Kate Steinle verdict, which was untrue. On Sunday they mistakenly reported that Washington Post reporter Dave Weigel had been fired for making a mistake. And if reporting that falsehood wasn’t embarrassing enough, they did it twice twice during a discussion about – you guessed it – the media making mistakes. The reporter uncharacteristically acknowledged his error and apologized after the commercial.

While mistakes are to be expected in any human activity, the way that Fox News accounts for them is not a mistake. They deliberately ignore their own failures most of the time and they don’t hold people accountable for lying when those people are Fox’s ideological allies. That’s what makes the network thoroughly untrustworthy as a source for news. And worse, with regard to their relentless fluffing for Trump, they have become no better than any other authoritarian style, state-run TV operation that exists solely to disseminate propaganda. Fox News, as well as Donald Trump, are indeed stains on America. A point that Trump agreed with just last year:

Wow, you are all correct about @FoxNews – totally biased and disgusting reporting.