As the legal noose tightens around Donald Trump and his confederacy of traitors, the stench of panic grows thicker and more pungent. Special counsel Robert Mueller’s investigation continues on its course to determine whether Trump and/or his team colluded with Russia’s documented efforts to interfere with the 2016 presidential election. And as Mueller goes forward, the Trump faction goes batshit crazy. 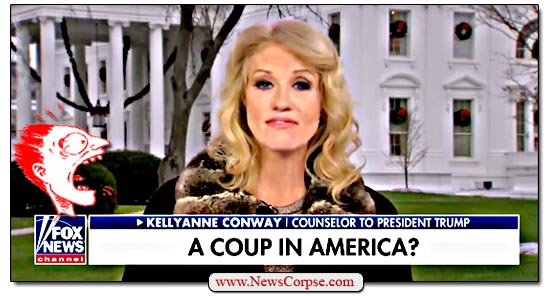 The latest point of departure for the GOP’s sanity is the discovery that Mueller has acquired “tens of thousands” of emails from the the Trump transition operation. That news sent the right into a frenzy with bogus claims that the emails were acquired illegally. That’s hysterical considering that Trump himself begged Russia to illegally hack Hillary Clinton’s emails and make them all public on Wikileaks.

But that’s only a small window into the dementia that plagues Trump World today. On Fox News there is a concerted and coordinated campaign to smear Mueller. They began by calling it a witch hunt, despite having already scored four indictments and two guilty pleas. But now they have escalated their conspiracy outrage to a new level. They now regard the entire investigation as an attempted coup. And they are pulling out all the propaganda stops to spread that inane theory.

Fox’s Jesse Watters explicitly used the word “coup” to describe Mueller’s activities during an interview with Trump shill Kellyanne Conway. Fox News legal analyst Gregg Jarrett suggested that the FBI is America’s version of the KGB. Fox host Jeanine Pirro demanded that FBI agents involved with the investigation be “taken out in handcuffs.” And a veritable chorus line of Foxies are calling on Trump to fire Mueller. Not surprisingly, Sean Hannity is at front of that line.

On Trump’s favorite Fox News show, Fox and Friends, the totalitarian rhetoric is as thick as mud. On Sunday morning they hosted Darrin Porcher (video below), a former New York police officer whose point of view is perfectly aligned with the Fox Doctrine. Porcher is the model of the Fox News flunky who spouts pre-chewed talking points in support of Trump. He praised the performance of the stock market and the unemployment rate, both of which are still running up under policies put in place by President Obama. Trump has done nothing to impact either. In fact, before the election he considered the stock market to be in a bubble and the unemployment rate to be fake news.

Saying that he “bleed[s] red, white and blue,” Porcher urges Americans to “stand behind our Commander-in-Chief.” He asserts that we must “acquiesce behind the political structure in play.” (Note: acquiesce means to accept something reluctantly and without protest). He’s literally telling critics of the administration to shut up and obey their masters. But where he totally succumbs to the blindness of tyranny is his statement that…

“Rooting against the president is equivalent to getting on an airplane and hoping that the plane crashes.”

That remark didn’t get so much as a sideways glance from the “Curvy Couch” potatoes of Fox and Friends. Even though they were among the Fox throng that spent eight years rooting against Obama. Rush Limbaugh even said proudly that “I hope he fails.” And every step Obama took throughout his presidency he was dogged by the overt hatred and bias emanating from Fox News. Most of them believed he was an illegitimate, gay, pot-smoking, fraud who was born in Kenya and pledged allegiance to ISIS.

Porcher’s advocacy of blind obedience is the opposite of patriotism. America’s democracy was built on a foundation of respect for dissent. It’s inscribed in the First Amendment to the Constitution. Acquiescence is what tyrants demand of their peasant populace. You have to wonder where Porcher was when the Tea Party (remember them?) was hammering away at Obama – with the ever faithful help of Fox News. But people like Porcher are too myopic to grasp complex political concepts. His simile of the crashing plane is just plain stupid. A better perspective of it would be to consider how to respond to a president who is in the process of deliberately crashing the plane. Would you root for him?

.@DrDarrinPorcher: "Rooting against the president is equivalent to getting on an airplane and hoping that the plane crashes." pic.twitter.com/oertDG8Ffc

In the past few weeks there have been a couple of important elections that drew national attention. One was for the governorship of Virginia. The other was for a senate seat in Alabama. In both contests Donald Trump campaigned furiously for the Republican candidate. And in both cases the Democrat won. Proving that the President’s support is no guarantee of success, even in staunchly red territories of the South. 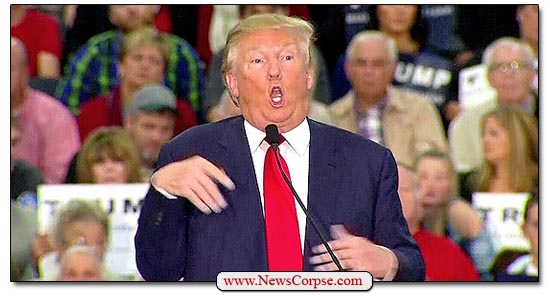 So it will come as good news to Democrats to learn that Trump is planning to hit the road in 2018 to campaign for Republican candidates across America:

“President Donald Trump is not on the ballot in 2018, but the White House is planning a full-throttle campaign to plunge the president into the midterm elections, according to senior officials and advisers familiar with the planning. […] The president has told advisers he wants to travel extensively and hold rallies and that he is looking forward to spending much of 2018 campaigning.”

That’s right. The president with the lowest approval rating since polling began is so enamored with himself that he thinks he’d be an asset to other political aspirants. Never mind the recent evidence that an association with Trump spells doom in races where Republicans should have had the edge. His conceit is so all-encompassing that he’s convinced that his presence is beneficial, or even desirable. This is a man so utterly lacking in self-awareness that he can’t comprehend that a majority of voters cringe at the site of him. And any candidate who stands next to Trump on the political stage is going to be covered by the stench of his divisiveness, racism, ignorance, misogyny, and boorish character.

Democrats must be salivating at the prospect of Trump’s ambitious campaign plans. They would surely welcome him into the fray knowing that he is more likely to hurt their GOP opponents than to help them. At the the same time he is one of the best motivators for Democrats to get out and vote. The more Trump tries to push his GOP colleagues, the bigger the blue wave is going to be next November. And as an added benefit, if Trump is traipsing around the country dragging down Republican electoral hopes, he won’t be in Washington creating more domestic and international crises. And Trump’s focus on electioneering is more proof that the only agenda of the Republican Party is the preservation of power.

Representatives of the Trump administration’s political team are as delusional as he is regarding the value of his contribution. One insisted that “this isn’t about adulation and cheering crowds.” That ignores the evidence of his narcissistic tendencies that compel him to continue holding rallies long after the presidential campaign was over. He clearly thrives on the fawning adoration of the deplorables who flock to his personal praise-a-thons.

The risk of having Trump stump for a candidate is that the thrill he gets from his glassy-eyed disciples only exacerbates the harm he is likely to cause. That’s because the more the crowds cheer, the more he talks about himself and ignores the candidate he came to promote. And whenever Trump goes off topic he winds up creating inane controversies that overwhelm whatever message he hoped to communicate.

For these reasons Democrats will be the first to encourage Trump to campaign vigorously and often. The more he is associated with Republican candidates the better the chances of electing Democrats. And Trump’s toxicity will only increase in the new year as more revelations from the investigations of his collusion with Russia emerge. And that’s not even taking into consideration scandals related to his financial corruption and sexual harassment and abuse. So bring it on Donnie. We double dare you.