Two months ago Fox News moved Sean Hannity’s program to 9:00 pm. It was the latest schedule change resulting from the terminations of Fox anchors (Bill O’Reilly, Eric Bolling) accused of sexual harassment and abuse. For Hannity it was a promotion to a more desirable time slot with a potentially larger audience. He must have been excited for the opportunity. 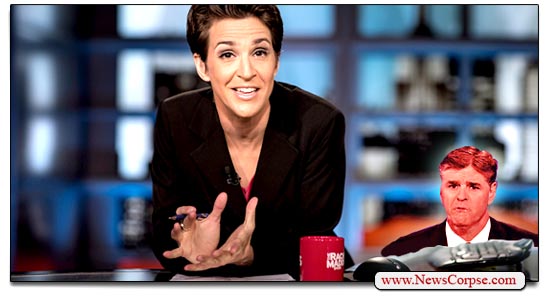 He very likely regrets it now. The latest Nielsen ratings report for November 2017, has some depressing news for Hannity and Fox News. In the new time period Hannity has been losing to MSNBC’s Rachel Maddow on a regular basis. The programs are not really competing for the same viewers, but the bragging rights for being number one are important for both promotion and advertising revenue. Hannity is especially hurting on the latter as a result of his support for the pedophile senate candidate in Alabama, Roy Moore. Advertisers have been fleeing the program and a successful Stop Hannity campaign was launched.

The Nielsen ratings results for the month of November reveal another bitter loss for Sean Hannity. With the pressure of going up against Fox’s top program, Rachel Maddow managed to score an impressive victory. That makes her the number one program in all of cable News in the coveted 25-54 year old demographic. Her ratings improved year-over-year by forty-eight percent. Fox News was down eighteen percent.

On the strength of Maddow’s popularity, the rest of the MSNBC lineup benefited as well. It was the only cable news network to grow its total audience from last year, rising thirty percent. Meanwhile CNN and Fox News both declined (-49% and -31% respectively). The MSNBC primetime was a strong contender across the board, finishing either first or second.

For early risers, Morning Joe took second place and delivered its best numbers in the twenty-one year history of the network. It was also the only show in the time period to grow its audience. In the 25-54 demo Morning Joe advanced twenty-two percent. CNN was down just three percent. And the “Curvy Couch” potatoes at Donald Trump’s favorite show, Fox and Friends, fell by twelve percent.

This has to be a satisfying victory for Maddow and MSNBC. Having suffered a year of Donald Trump’s infantile whining about fake news and low ratings, the network can boast that it handily outperformed Fox News (aka State-Run TV). It’s an indication that the country is hungry for real, in-depth reporting and analysis that doesn’t talk down to them. And, more importantly, doesn’t lie or engage in humiliating episodes of fawning over and defending the ignoramus in the White House.

As we go forward we will likely see more of the same as Trump’s star falls ever further and the legal noose around his neck gets tighter. Hannity and his Fox News colleagues will undoubtedly ramp up the crazy (just as Trump is doing) in a desperate attempt to keep from becoming totally irrelevant. But their desperation will result in even more ludicrous conspiracy theories and lunatic outbursts. Who knows? This might actually end up being kinda fun to watch.