One of the favorite pastimes of right-wing propagandists is to try to deflect the well documented history of their racism by flipping the narrative and falsely accusing liberals of being prejudiced. It’s a futile exercise in deception considering that liberals are the champions of equality for all, while conservatives put up obstacles at every opportunity. It’s liberals who fight for civil rights, and Republicans who suppress everything from voting to jobs to education and more. 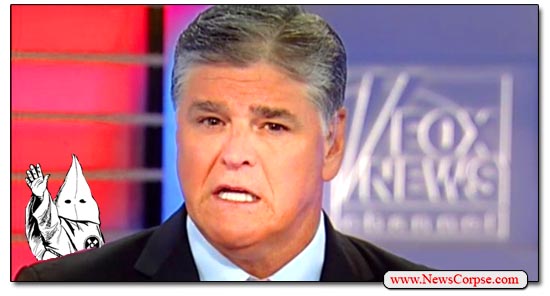 So it shouldn’t surprise anyone that the primetime block on Fox News is a virtual White Power Broadcasting service. It’s triumvirate of Tucker Carlson, Laura Ingraham, and Sean Hannity are beloved by America’s confederacy of white nationalists and neo-Nazis. The fact that that doesn’t make them (or Fox) nervous tells you all you need to know about them.

Leading this pack of weasels is Sean Hannity. He is also one of those who most frequently accuses Democrats of the abhorrent behavior that conservatives are known for. And that occurred again on Monday night’s episode of his program. In order to disrupt some anti-Trump rallies, Hannity sent Fox contributor Lawrence Jones to see if he could goad some innocent people into saying things that Hannity could take out of context. But he failed miserably, so he had to bend some comments into absurd misrepresentations of reality (video below). He began by saying that…

“There were some moments, vile, racist, vicious, horrible. Two men actually approached our own Lawrence Jones and one told him to go back to Fox News where there’s ‘more cotton for you to pick.’ [and another said] ‘He’ll tell you to go back to Kenya next.'”

This is what Hannity thinks is vile and racist? Anyone with an elementary grasp of the English language can see that neither of those comments were directed at Jones. Telling someone to “go back to Fox News where there’s more cotton for you to pick,” is a criticism of Fox News as a figurative plantation where African-Americans are exploited. That is, when they aren’t being disrespected, insulted, and belittled. And the comment about going back to Kenya was obviously a sarcastic reference to the Birther movement that Hannity and Fox participated in, wherein they maligned President Obama as an un-American, illegitimate president. The protester who said it was clearly referring to Trump as the person who would tell Jones to go back to Kenya.

Hannity further demonstrated that by rattling off a list of phony “accomplishments” that he said Trump had achieved for African-Americans. Then he asks why, with all of that, the black community doesn’t support him. To which Jones had a pretty good response. He said that Republicans haven’t been articulating their message and that “the President can make a turn if he goes into the community.” Which, of course, Trump has never done. Every one of his dozens of cult rallies have been in snow white communities and attended by overwhelmingly white devotees.

Hannity is suggesting that African-Americans who don’t support Trump are stupid and don’t understand what’s in their own best interests. He thinks that they should submit to the nearly all-white GOP to be their paternal caretakers. It’s a condescending attitude that is racist at its core. The reason African-Americans almost universally support Democrats is because they can see that it’s a party that embraces diversity, including in the ranks of their representatives and leadership. But conservatives are devoted to oppressing anyone that doesn’t look and think like them. And these stunts by Hannity only drive home that point with greater emphasis.