Prior to running for president with the help of Russian propagandists and American white nationalists, Donald Trump had another career. No, it was not as a real estate tycoon. His record as a businessman was rife with failure and self-aggrandizing lies. What he was best known for was being the host of a reality TV game show that consumed fourteen years of his life. Real billionaires wouldn’t have time for that nonsense. That was his job. 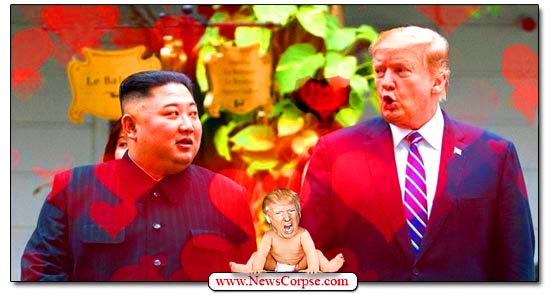 Unfortunately, Trump has taken that work experience with him into the White House. He has behaved in precisely the same manner that a television junkie would. Everything he does is papered over with his obsession for how he looks. His entire presidency is a quest for good publicity. That’s why he despises the media so much for daring to report on what he actually does and says. He misses his TV world everyone just smiled and praised him.

This was the case on his recent junket to Japan for the G20 conference, and his subsequent diversion to the Koreas. In Japan Trump tried desperately to appear important, although he failed to produce any substantive benefit for the U.S. However, he did joke with his buddy (boss?) Vladimir Putin about Russia’s interference in the 2016 presidential election. Even worse, he complained to Putin about the media, saying that he would like to “get rid of them.” They shared a hearty laugh.

Trump’s next destination was South Korea. But before he left Japan he sent a Twitter invitation to KIm Jong Un to meet him at the DMZ for a handshake. On its face that is a contrived and pointless exercise in diplomatic foolishness. And when it occurred it turned out to be even worse that might have been expected. Once again, nothing of substance was achieved. It was an embarrassing photo-op that joined a nuclear-armed madman with the leader of North Korea. And Trump’s remarks at the meeting should worry every American (video below):

“We got to meet, and stepping across that line was a great honor. A lot of progress has been made. A lot of friendships have been made. And this has been, in particular, a great friendship. So I just want to thank you. […] A lot of really positive things are happening. Tremendous positivity. Really great things are happening in a lot of places. We met and we liked each other from day one. And that was very important.”

First of all, stepping across the DMZ line was an empty gesture that only succeeded in elevating the international profile of Kim. There is no honor in that. Secondly, there was absolutely no progress made on any initiative. And anything positive must still be a closely held secret because Trump didn’t offer any examples. However, Trump did note that Kim’s acceptance of the invitation made Trump look good, which is, as always, his singular concern.

But the most troubling part of this message was Trump’s reaffirmation of his affinity for foreign dictators with reputations for brutality and oppression. We must never forget that Kim is a tyrant who starves his own people, imprisons hundreds of thousands in gulags, and executes his critics, including journalists and family members. Also, he has refused to keep a single promise made at previous summits with Trump. His nuclear ambitions are in tact and progressing.

Nevertheless, Trump still trusts Kim, showers him with cringe-worthy flattery, and considers him a great friend. Can you imagine Trump during World War II treating Hitler or Stalin the same way? You don’t have to answer that.

The symbolic triviality of Trump crossing the DMZ is representative of his whole presidency – or life for that matter. He is pitifully pretending to have achieved something in order to polish his public persona. He isn’t interested in the welfare of the country or the American people. And his ego-driven antics are so transparent that they only serve to embarrass him and our nation. The sooner he is removed from office and held accountable for his many crimes the better.

TRUMP: This has been, in particular, a great friendship … We met and we liked each other from day one.

REMINDER: Kim is a brutal dictator who imprisons 1,000s in gulags, starves his people, and executes critics, including journalists and family members.pic.twitter.com/RywMwrVqtw