It is well known that Fox News has foraged an uncommonly close relationship between themselves and Donald Trump. In fact, Trump would not be president today but for Fox News. They shamelessly championed his campaign, while simultaneously maligning Hillary Clinton and slandering his critics. Subsequently, they have continued to serve as his private PR operation throughout his presidency. 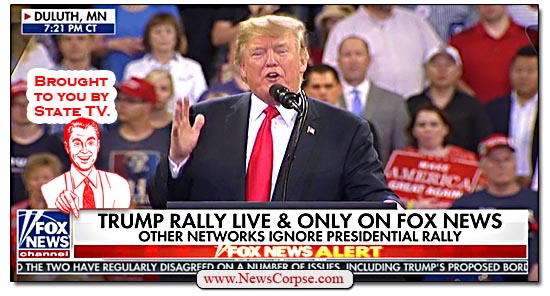 During the 2016 presidential cycle, Fox News covered every single one of his cult rallies in full and uninterrupted. It amounted to hundreds of millions of dollars worth of free TV airtime. And that’s not even counting the dozens of interviews Fox did with adoring Trump-fluffers like Sean Hannity and the “Curvy Couch” potatoes of Fox and Friends. They never did anything similar for Clinton.

Now, Fox’s primary media correspondent and host of MediaBuzz, Howard Kurtz, is weighing in on how Trump is being covered by the cable news networks. And he’s not a happy camper. In an interview with his colleague Bill Hemmer, Kurtz seemed to mimic Trump by raging against CNN and MSNBC for not carrying all of his alleged campaign kickoff rally in Orlando.

First of all, the assertion that this was the kickoff of Trump’s campaign is a blatant lie. He actually filed for reelection on the same day he was inaugurated in January of 2017. And he’s held dozens of rallies since then. This was a charade that was was really just another one of his cookie-cutter cult rallies where he repeated exactly the same tedious themes that he has in all of his other ego-stroking affairs. Just because he calls it a kickoff, doesn’t mean that the media has to obediently buy into that lie.

Consequently, CNN covered the rally just long enough to observe that Trump wasn’t saying anything that he hasn’t said at every other rally. MSNBC monitored the event in case Trump said anything newsworthy. He didn’t, and therefore they didn’t bother interrupting their regular programming for some of Trump’s harshly partisan and hostile rhetoric. And this infuriated Kurtz who said that…

“What I have to say about this is it’s just a lack of class. Now, I’m not saying that the cable networks have to cover every Trump rally, and it did turn into a highly partisan speech in Orlando last night. But this really is sort of networks playing into what Steve Bannon used to call acting like the opposition party. To just simply say we’d rather have our own pundits talking while the president is talking, spending the whole next day analyzing and picking apart what he said, rather than letting our viewers hear from the president as he asks for a second term or begins that process, just seems fundamentally unfair and raises questions about how they’re going to cover this entire campaign.”

A “lack of class”? Kurtz never bothers to explain what was newsworthy about Trump’s speech. But he did associate it with the disgraced former Trump aide and aspiring neo-Nazi, Steve Bannon. Kurtz thinks that people can’t form their own opinions of what Trump said unless they heard it in this address, even though they’ve had the opportunity to hear it dozens of times in the recent past. And he thinks it’s “fundamentally unfair” for news networks not to force Trump down everyone’s throats for the umpteenth time.

It’s interesting to note that Kurtz has never gone to bat like this for any Democrat. He has never whined that it’s unfair or lacks class that Fox News declined to air all of Clinton’s public speeches, or any of those by the current batch of Democratic candidates. No matter how many times they occur. It’s only Trump who is being treated unfairly if his drooling and repetitive rampages are not broadcast 24/7 on every channel.

The one thing that Kurtz said that has some merit, at least with regard to Fox News, is in his closing when he said that this “raises questions about how they’re going to cover this entire campaign.” Although, anyone who has watched Fox for more than few minutes knows exactly how they’re going to cover the campaign – like the loyal StormTrumpers that they are and have always been.

One sign that the 2020 presidential campaign season is in full swing is that Fox News is pulling out all the stops for their State TV approved candidate, Donald Trump. Of course, Fox has consistently supported Trump since his inauguration, even through episodes where he took Vladimir Putin’s side on the election hacking, or declared that he and Kim Jong Un “fell in love.” And Fox News has unflinchingly defended Trump’s unsavory relationship with Russia and flagrant obstruction of justice, as revealed in the report by special counsel Robert Mueller. 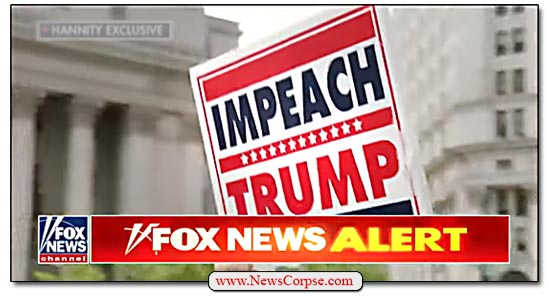 Meanwhile, Trump continues to incriminate himself, as he did during his ABC News interview with George Stephanopoulos. And Fox News continues to cover up the impact of his increasingly severe, and often incoherent, meltdowns. Calls for Trump to be impeached are growing rapidly, with more than sixty Democratic members of Congress (and one Republican) voicing that view publicly.

So naturally, Fox News joined other media outlets in polling voters on that question. Their results could not have pleased Trump. The survey found that 43 percent think that Trump should be impeached and removed from office. Another 7 percent favor impeachment without removal. That’s a 50 percent majority versus the 43 percent who say he should not be impeached at all.

However, Fox News reported on these results with a graphic that said 50 percent oppose impeachment or removal. That’s a blatant lie that misrepresents their own poll. It was so egregious that it resulted in Fox issuing a rare “clarification“ to correct their error. Fox and Friends First host Heather Childers said that…

HUH? The wording was indeed wrong on the graphic, but that was hardly the main problem. Fox is deliberately trying to suppress the fact that most Americans want to see Trump impeached, and most of those want him removed as well. To be clear, there was another question in the poll that didn’t differentiate between impeachment and removal. It did find that 50 percent said “no.” However a follow up question found that 12 percent of them still wanted Trump to be impeached, but not removed.

So no matter how you slice it, Fox is mangling the results of their own survey in order to protect Trump from bad news. They are doing this to disinform the public as to how much support there is for Trump’s impeachment. They are also doing this to pacify the fragile ego of the Narcissist-in-Chief. And finally, they are doing this to avoid triggering an onslaught of outrage from their glassy-eyed, cult worshiping viewers. But in the end, they will fail on all three counts, because the American people are not as stupid as the subset of them who watch Fox News.