America is undergoing an unprecedented assault from within that emanates from the highest reaches of its government. From the very beginning of his presidency, Donald Trump has exhibited a perverse affinity for murderous dictators all over the world. This fetish began with Russia’s Vladimir Putin, extended to North Korea’s Kim Jong Un, and stretched further to include China’s Xi Jinping and others. 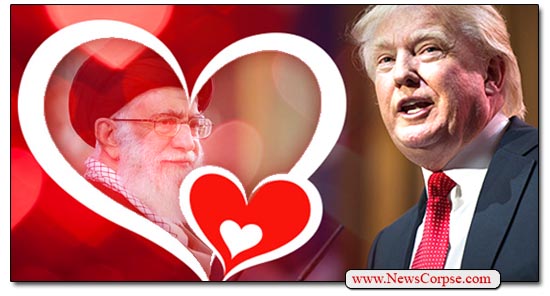 Now Trump is putting on display his love for yet another deadly and abhorrent regime. This is one that has famously articulated its desire for “death to America.” And it has been a threat to the United States and its allies for decades. Which makes it all the more disturbing that Trump told reporters on Saturday morning that he wants to “Make Iran Great Again.” Yep. those are his exact words. And what’s more, he expressed his personal hope that “I’m gonna be their best friend.”

This outpouring of affection for a hostile regime that is one of the world’s biggest sponsors of terror was triggered by the recent clash between Iranian and U.S. forces in the Strait of Hormuz. After Iran shot down an American surveillance drone, Trump ordered a retaliatory strike that he later rescinded. It was a display of incompetence, chaos, and lies that can only serve to damage America’s interests and reputation.

So naturally Trump took it upon himself to hail his ineptitude it as a stroke of brilliance. And on Saturday, during his peculiar “chopper talk” session with the press, Trump said this:

This is eerily similar to Trump’s comments regarding North Korea. He seems to believe that dangling the prospect of an American-provided economic expansion is what all of these dictators are yearning for. And he also believes that he can engineer that economic boom for any foreign country he chooses. All they have to do is submit to whatever he says with unbending obedience.

Furthermore, Trump insists that if Iran agrees to some unspecified terms regarding their nuclear capabilities, he will see to it that they become a wealthy nation. What’s troubling about this is that he is making no demands with regard to Iran’s support for terrorism or their human rights atrocities both inside and outside of Iran. He’s saying that if Iran agrees to a rollback in their nuclear programs (which they already did under President Obama), Trump will embrace them and enrich them so they can finance more savagery throughout the world.

And the cherry on top of this nightmare pie is that Trump is promising to be Iran’s best friend. You know, the “death to America” folks. Trump even gave Iran a pat on the back for not shooting down another plane on Friday. In this highly suspicious story, Trump thanked Iran saying “I think that was a very wise decision, and I think that’s something that we very much appreciate.” Let that sink in. Trump is sending his “appreciation” to Iran for not shooting down our plane. How thoughtful.

Meanwhile, Trump offers nothing but animus and scorn for our friends and allies. He lambastes Mexico, Canada, and Europe at every opportunity. Still, Trump is spreading his friendship pretty thin. He has promised to be best buddies with Russia, North Korea, and China. Never mind the horrific roles they play on the international stage. And set aside how these offers of fellowship are reserved for hateful tyrants. Now we can add Iran to the list of brutal governments that have won Trump’s heart. How does any of this advance American interests?