The first night of the 2020 Democratic primary debate was a refreshing departure from the infantile politics of the Donald Trump era. There was no childish name-calling; no hostile outbursts; no hateful displays of misogyny, racism, or other forms of bigotry; no narcissistic delusions of grandeur; and no shameless lies. Remember when politics used be like that? 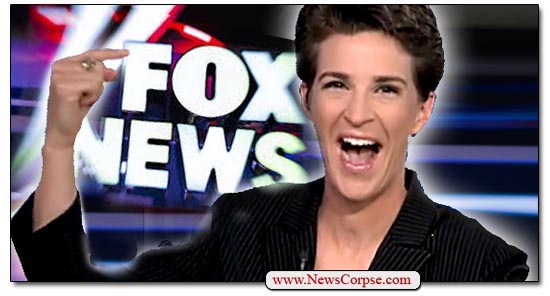 However, Trump himself was watching and couldn’t help injecting his unique brand of loathsome immaturity. He began with a typically whiny criticism in a one-word tweet that just said “BORING.” Probably because it lacked the histrionics of a kindergarten full of cholicky crybabies like Trump. And it went downhill from there. He later mocked a brief technical glitch that lasted about six seconds. And he followed that up with a fake video of the glitch.

It didn’t take long for State TV (aka Fox News) to weigh in with their own “fair and balanced” debate analysis. It consisted of a report by their media correspondent Brian Flood, and was headlined “PEACOCK PROPAGANDA? Media critics blast NBC over far-left opinion host Rachel Maddow’s role at Democratic debate.” It’s cute that Fox News still has the gumption to criticize other networks for being biased. But this report really stretched the boundaries of idiocy.

First of all, Flood quoted four “media critics” for his article. All four of them from ultra-rightist outlets that could be relied on to despise MSNBC and Rachel Maddow regardless of how they performed. They included Glenn Beck’s BlazeTV, the noxious Accuracy in Media, the venerable wingnuts at the Media Research Center, and the Daily Caller, a website founded by Fox’s own Senior White Nationalist, Tucker Carlson.

Flood began his rant by lying about Maddow being “too biased for The New York Times.” In fact, the Times only indicated that they would prefer their reporters sticking to programs that were focused on news without opinion. Flood failed to mention that the Times had the very same restrictions on almost every program on Fox News.

Then Flood tried to portray Maddow’s debate questions as a “softball fest” because she asked about things like climate change and the report by special counsel Robert Mueller. Of course these are serious issues that every candidate should address. Particularly Democratic candidates because these are the issues that are most important to their constituents.

Holding candidates accountable on the subjects that matter most to the electorate is apparently being too soft according to Flood and Fox News. But then again, Fox is the network that has been working overtime to spin the Mueller report as having exonerated Trump when it explicitly said that it didn’t. And lately they have been frantically trying to sweep the latest allegations of rape against Trump under the carpet.

Finally, Flood posted a flurry of tweets that criticised Maddow and MSNBC. They included frequent Fox News contributors like Mollie Hemingway, Jonah Goldberg, and Dan Bongino. Every one of them are virulent opponents of all things liberal or Democratic. Is it any wonder that Flood’s article concluded that “media critics” were universally negative toward the debate? He didn’t bother to ask anyone who was independent or left leaning.

It would be interesting to see how Fox News would handle a Republican primary debate. But it doesn’t appear that we’ll have the opportunity, even though there is a credible candidate running against Trump. Bill Weld is the former two-term Republican governor of Massachusetts, but he can’t even get a town hall or an interview on Fox News. Did they get an order from Trump to bury Weld? What do you suppose they are afraid of? Other than – obviously – Rachel Maddow.

The examples of Donald Trump trying to subvert the Constitution that he allegedly swore to defend keep piling up. Whether it’s his efforts to suppress the media that he calls “the enemy of the people,” or enriching himself with money from foreign governments, or his attempts to ban immigrants based on their religion, or his phony national “emergency” to get funding for his border wall, or his threats to engage in warfare without the consent of Congress. Trump has demonstrated that he has zero respect for the document that defines America’s principles.

On Thursday morning the Supreme Court issued a ruling that dashed the Trump administration’s hopes of perverting the census by adding a question on citizenship. The Court sent the matter back to the district court that already ruled against Trump. But rather than respecting the decision, Trump lashed out on Twitter (of course) with a flagrantly contra-legal suggestion:

…..United States Supreme Court is given additional information from which it can make a final and decisive decision on this very critical matter. Can anyone really believe that as a great Country, we are not able the ask whether or not someone is a Citizen. Only in America!

It won’t surprise anyone to learn that Trump is incapable of grasping why the citizenship question is improper and discriminatory. His only interest is in distorting the census results by smothering responses from immigrant residents. He doesn’t know that the census is a count of ALL those residing in the United States, without respect to citizenship. And his purpose – along with the Trump Republican Nationalist Party – is to repress the representation of districts that traditionally vote Democratic.

It’s a purely political motivation that is driving Trump. But his intention to delay the census for his partisan benefit is also unpatriotic and unconstitutional. The census is stipulated to take place by Article I, Section 2 of the US Constitution. It isn’t voluntary or discretional. And federal law goes even farther to assign an April 1st date for the census to be undertaken. Trump’s tweet, therefore, expresses a blatant desire to breach the Constitution and federal law – again. Ironically, the census is found in the same section of the Constitution that grants Congress the sole power of impeachment. Maybe that’s why Trump is avoiding it.

The fact that Trump can announce these criminal acts so publicly is reflective of his disrespect for the law and his aspirations for the powers of the tyrants he admires (Vladimir Putin, Kim Jong Un, Xi Jinping, etc.). He often comments on his jealously of their despotic rule. And remarks like these refute any claim that he might have just been joking.

The American people want and deserve an accurate census. And Trump’s efforts to undermine that for his own purposes have – for the time being – been blocked. But the real patriots in this country need to remain vigilant, because Trump has shown that he will continue to defile the Constitution every chance he gets if he isn’t stopped. It’s shocking and sad that we are all now conscripted into having to defeat the President’s unconstitutional ambitions.