As the nation continues to suffer through the worst pandemic in a century, Donald Trump continues to downplay the risks and seeks to force the American people back into unsafe workplaces. His record thus far has resulted in more than 1.4 million people infected and more than 86,000 deaths. But apparently that isn’t enough for Trump and his GOP confederates. 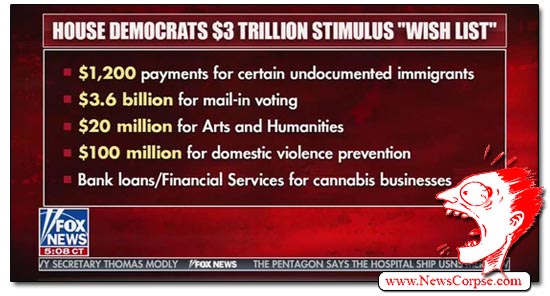 On Friday morning Trump held a press conference to announce his “plan” for developing a vaccine. True to form, the plan consisted of nothing but happy-talk and bragging about imaginary achievements. He baselessly claimed that there would be a vaccine before the end of the year, contradicting the estimates of every credible immunologist. Even worse, he insisted that people would return to work whether or not there was a vaccine. Trump still fails to grasp that there can be no resolution of this crisis without a vaccine, along with universal testing, tracking, and treatment.

Predictably, State TV (aka Fox News) is backing Trump 100% in two significant ways. First, they are practically ignoring the the COVID-19 (coronavirus) pandemic throughout their broadcast day. In its place they are feverishly flaunting the phony “ObamaGate” conspiracy theory that no one – including Trump – can even define. And secondly, what little coverage of the pandemic they do offer is starkly skewed to a far right perspective that is generally reserved for fringe Internet trolls.

For example, Fox News did a segment on the HEROES Act, a Democratic congressional initiative to provide relief for those impacted by the pandemic. The Fox angle was focused squarely on what they considered to be inappropriate funding programs. According to Fox (and featured in their on-screen graphic above), there were five primary targets of their criticism:

These include adults who were brought here as children and who have been working, paying taxes, and even serving in the military. But even were that not the case, undocumented immigrants are still members of our communities and require assistance in order to mitigate the spread of the virus.

This is required in order to insure the safe conduct of the upcoming election in November. That’s something that Trump and Republicans don’t care about since they prefer it when fewer people vote. Trump even said that with higher levels of voting “you’d never have a Republican elected in this country again.” What’s more, recent elections in Wisconsin where mail-in voting was prohibited by the GOP resulted in at least 52 people becoming infected with the coronavirus. Finally, both Trump and Fox News have been trying to bankrupt the Post Office in order to suppress voting access.

This is a category of relief that Republicans are fond of disparaging, but which the American people support. Particularly during times of hardship, like those we are now experiencing. It’s also a sector of the economy that employs millions of Americans who are not otherwise covered by previous relief programs. Plus, financially it’s a pittance.

It’s hard to figure out why they would include this on their hit list. Are they in favor of domestic violence? And there is evidence that quarantining has increased the incidence of such violence.

This was clearly added in order to exploit the association to illicit drugs. However, in the real world, cannabis is actually a valid medicine that many Americans rely on.

It’s safe to say that most Americans would approve of the items in this Democratic “Wish List.” But to make matters worse, here are some of the items that Fox News left out:

This is a positive agenda of support for the American people that Trump is already threatening to veto. One of his treasured initiatives that he is holding the bill hostage over is a payroll tax cut. That’s a deliberate attack on Social Security which is funded by that tax. Furthermore, with 36 million people out of work, that’s not even a tax cut that would provide much benefit. Those unemployed Americans already have zero payroll tax deductions. And another of Trump’s sticking points is his proposal to prohibit lawsuits against corporations where employees are harmed by lax safety precautions related to the coronavirus. So Trump wants to force people back to work and then indemnify the companies if those people get sick or die.

But none of this has to make any sense. It only has to be played over and over again on Fox News to keep their glassy-eyed cult followers in line. They are not an especially cerebral crowd and can be easily trained to obey the edicts of Dear Leader as manifested by his media machine. The good news is they are a small cadre of crackpots who will ultimately have little impact on the direction of the nation. And November can’t come too soon.