Proving that he is still living in a fantasy world where everything he does is perfect and universally revered, Donald Trump tweeted Sunday morning that “Doing REALLY well, medically, on solving the CoronaVirus situation.” Never mind that there are now nearly 1.5 million cases and 89,000 deaths in the U.S., and those numbers continue to rise. This is another “Mission Accomplished” moment for Trump. 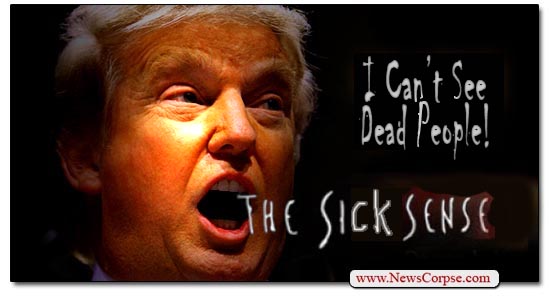 In the meantime, Eric Trump is serving Fox News duty by visiting with Fox’s Senior Trump-Fluffer, “Judge” Jeanine Pirro (video below). The Trumps continue to exploit Fox News for their official propaganda dispatches despite Trump’s increasingly frequent complaints that the network “doesn’t deliver for US anymore.” Clearly they still regard Fox as their special delivery carrier of choice, particularly with bootlicking sycophants like Pirro, Sean Hannity, and the “Curvy Couch” potatoes of Fox and Friends.

In this latest episode of “Inebriety Apprentice,” an ever eager Eric sought to attract daddy’s attention and love by diminishing the tragic perils of the COVID-19 (coronavirus) pandemic, while simultaneously dispensing flagrant falsehoods about Joe Biden. In Trump World, politics takes precedence over dead Americans. Eric led off with an obviously ludicrous claim that “Biden loves” the nation being locked down, a condition that is wholly attributable to his father’s negligence and incompetence. He went on to mock Biden for “making some horrible blunders,” which is ironic considering the shoddiness of the rest of this tantrum. For instance, Eric said that Democrats…

“…think they’re taking away Donald Trump’s greatest tool, which is going into an arena and fill it with 50,000 people every single time. They’ll milk it every single day between now and November 3rd. And guess what? After November 3rd Coronavirus will magically all of a sudden go away and disappear and everybody will be able to reopen.”

First of all, Trump has never drawn 50,000 people to any of his cult rallies – or even half that, much less done it “every single time.” Eric is suffering from the same Crowd Size Inflation Disorder as his father. It’s a disease that is rooted in inferiority and impotence anxiety. Secondly, Eric’s assertion that the coronavirus will “magically all of a sudden go away” after the election implies that it’s a nothing but a political hoax. Does that mean the 90,000 dead Americans will spring back to life and 36 million people will return to jobs that were never gone on November 4th?

Eric’s assertion that drawing allegedly large crowds is daddy’s “greatest tool” actually puts Trump in a trivial light. Any good cult leader (Jerry Falwell, Jim Jones, Adolf Hitler, etc.) can do that. A good president should have more significant tools and skills like intelligence, insight, and compassion, characteristics that the Trump family sorely lacks. Eric also cited as Papa Trump’s “greatest asset” that “the American people love him [and that] he’s relatable.” Not according to pretty much every poll that shows Trump has had a majority disapproval throughout his presidency. He even rates lower on trust than his nemesis, CNN. You know that’s gotta sting. But Eric wasn’t through…

Let’s get it out of the way that having a “cognizant strategy” isn’t sad at all. The word means “having or showing knowledge or understanding. So naturally Eric misused it. As for the “nonsense” in the Hope Act, apparently Eric is opposed to a bill “that would streamline and modernize how eligible recipients can access services to alleviate hunger and food insecurity, receive affordable housing, and expanded banking services.” Actually, he probably meant the HEROES Act that allocates additional relief funding for those impacted by the ongoing pandemic. But he made a “horrible blunder.”

Eric is also opposed to making voting more accessible in a manner that won’t make citizens chose between exercising their rights and staying alive. And he’s inventing some initiative that no one has proposed to allow illegal immigrants to vote.

What’s curious is that Eric’s grievance about daddy not being able to have a rally could be rectified by daddy just having a rally. The only one stopping Trump from bringing his glassy-eyed disciples out of their bunkers to congregate and spread their germs is Trump. Democrats aren’t locking the President into the White house against his will. So Eric’s protest is really just more petulant whining as a means of shifting blame for his own failures to others. Like Father, like son.

What’s more, Eric is appearing with Pirro on Fox News where the management has mandated that employees work from their homes. Both Eric and Pirro are safely conversing from the comfort of their respective mansions. If this is all a big Democratic hoax, which is what the shills on Fox News are telling their dimwitted viewers, then why don’t they simply revoke the order to work from home and bring everybody back into the studio? That’s a question that no one on Fox will ask, much less answer. And it’s a concept that is far too complex for the likes of little Eric.

After saying Biden can’t go on stage without making a horrible blunder, Eric Trump accuses Democrats of manufacturing Coronavirus shut downs to prevent Trump from holding rallies. He goes on to claim after Election Day, “Coronavirus will magically disappear” like it’s a hoax pic.twitter.com/nytfmbVN8I