The mission of Fox News from its inception has been to deceive their viewers by distorting the stories they present in order to advance the interests of corporations and the wealthy. They feverishly twist their “alternative facts” into maliciously negative attacks on Democrats and progressives seeking to benefit the majority of the American people. 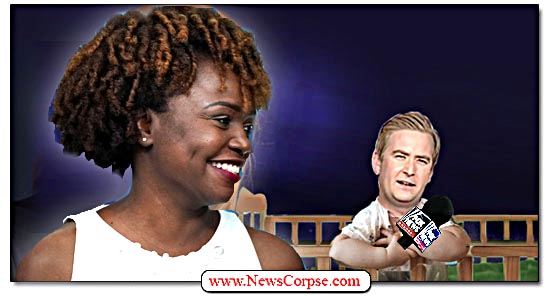 Fox’s White House correspondent, Peter Doocy, is the frontline propagator of their propaganda. He occupies a seat at the daily press briefings tasked by his bosses, the Murdochs, to manufacture phony controversies and try to embarrass the President and his spokespeople with “gotcha” questions. Unfortunately for Fox News, he has never been very good at it.

On Friday Doocy sought to waste the time of every in the room by asking Press Secretary Karine Jean-Pierre a question that reeked of bias and ignorance. Jean-Pierre replied with a remarkable degree of patience, considering the blitheringly idiotic inquisition by Doocy:

Doocy: Why is the president bragging today about gas prices?
Jean-Pierre: Because it’s gone down.

That’s right! The answer was as simple as that. But it was way above Doocy’s capacity to grasp it. Or perhaps just outside of his mandate as a disinformation disseminator. And yet, after being politely told why President Biden was happy about the trend in gas prices, Doocy felt compelled to resume his badgering:

Doocy: It’s still $1.72 higher than when he took office.
Jean-Pierre: It has come down in a way we haven’t seen, it’s trajectory coming down, in over a decade.
Doocy: It’s still over $4.00 a gallon though. Is that good?
Jean-Pierre: You want to talk to a nurse or a teacher or a firefighter, if having that little bit of breathing room doesn’t matter to them. […] That matters. And the reason we’re seeing that is because of the work this President has done the last several months.

Doocy: “Why is the president bragging today about gas prices?”

Jean-Pierre: “Because it’s gone down.” pic.twitter.com/3D49EfS7uC

For the record, gas prices have been falling for two months. In much of the country the average price is below $4.00 per gallon, a decline of 20%. Most consumers would regard that as positive news.

While oil is an international commodity that no president can control, Biden can take some of the credit for the savings due to his affirmative action. Early on he ordered the release of a million barrels of oil a day from the strategic reserve. He put pressure on oil companies and stations not to gouge consumers as oil prices were falling. He supported alternative energy and vehicles, which reduces demand while supplies were increasing, which drives down prices.

In the meantime, Fox News and the Republican Party they shill for, seem to be upset that the American people are saving money on gas. While they steadfastly blamed Biden as the prices rose, they are now criticizing him for the decline. And Doocy’s insinuation that people should still be mad because gas costs more than it did in 2020, ignores the reality of the marketplace. There’s a reason that Biden once referred to Doocy as a “stupid SOB.”

When Biden took office the nation was still suffering from the effects of the COVID-19 pandemic at its peak, and people were not traveling very much or even commuting to work. That absence of demand is what brought gas prices down so artificially low. Since Biden’s inauguration the pandemic situation, and the economy, have improved considerably. Consequently, people are back to work, they’re taking trips, and they are considerably more confident that they can spend money – even with inflation – without risking their financial welfare.

All of that is positive news for the nation and the people. But leave it to Fox News to try to find some apocalyptic spin that they can use to foment fear and make people’s lives miserable. Because they want people to to be miserable in order to have something to bash Biden with. And stirring up political hostilities is much higher on their priority list than telling the truth. Especially if the truth might make people happier and look more favorably toward the President.