Poor Donald Trump. Nothing seems to be going right for him lately. And true to form, the “self proclaimed most fabulous whiner.” is whimpering about it incessantly. Whatever makes his cult disciples regard him as anything but a pathetic crybaby is a continuing mystery of modern political posturing. 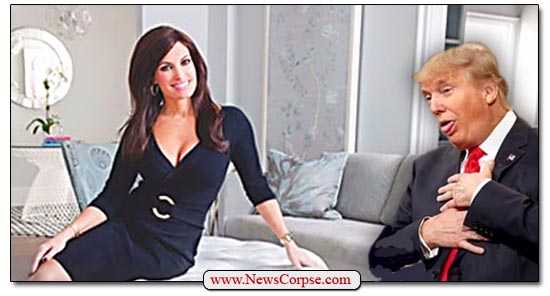 So far, August has been a devastating month for Trump and his cult followers. A brief summary of his latest flops include…

In the face of this onslaught of catastrophes, Trump and his defenders are circling their wagons and pretending that everything is hunky-dory. Trump even thinks that the FBI scandal has boosted the prospects of his Republican confederates. And he’s not the only one.

Don Jr’s fiancé, Kimberly Guilfoyle, visited the pro-Trump propaganda network, Newsmax, on Tuesday and, in her inimitable “the best is yet to come“ fashion, belted out a celebratory spiel that exceeded all standards of sanity, even for her. She was so over the top that even host Rob Schmitt tried – and failed – to cut her off (hysterical video below). Guilfoyle raged that…

“People love president Trump and they want him back in the White House. That’s what this is about. Time and time again president Trump has been exonerated. They have been pulling this stuff on him for six years, starting with illegally wiretapping him.”

There is so much wrong with that that it requires a bit of rational review. First of all, the only people who “love” Trump are the brainwashed disciples who have abandoned critical thinking and any adherence to truthfulness. And the only people who want him back in the White House are power hungry and/or frightened Republicans, and shadowy figures with phone numbers in Moscow.

Secondly, Trump has never been “exonerated.” In fact, he is a seething cauldron of guilt for crimes ranging from operating corrupt charities and universities, to bank and tax fraud, to election tampering, to obstruction of justice, to witness intimidation, and most recently to mishandling classified documents and lying to the FBI.

Furthermore, Guilfoyle is regurgitating the long ago debunked nonsense that Trump had been “illegally wiretapped.” It never happened, and was even refuted by Trump’s own Justice Department way back in 2017. That, however, didn’t stop Trump from lying about it some more as recently as February of this year. But Guilfoyle was just getting started. She went on to say that…

“[Trump] is singly the most persecuted person in American political history. People who are Democrats, Independents, Libertarians – whatever you want to say – they’re all coming out in droves to say they support the president. So all they have done is just magnify his excellence 10x more, to the point where the American people are begging, literally I see people every day begging him to run again in 2024. And we would only be so lucky as a country because he’s the only thing standing between them and us.”

Bragging that her sugardaddy-in-law is the “most persecuted person in American political history,” isn’t the defense that she thinks it is. Rather, it points to the abundance of criminal allegations swirling around him. And if Guilfoyle really believes that Democrats are “coming out in droves to say they support the [former] president,” she’s even more cognitively impaired than Trump is. Which would also explain her jarring pairing of the words “his excellence” in a sentence referring to Trump.

What’s more, Guilfoyle is just fanning the flames of cultism with her ludicrous assertion that people are “begging” Trump to run again. In fact, a recent poll shows that only 39% of registered voters expressed any such interest in another Trump candidacy. Likewise, she is elevating him to superhero status by claiming that he alone is “standing between them and us,” whoever they are. As for another Trump term in office, he has just provided a preview of what his agenda would be. And it isn’t pretty…

Trump reposts an op-ed describing the likelihood of payback — such as raiding homes of Biden, Clinton, Comey etc — if he retakes the White House. pic.twitter.com/v067yHOK69

Kim went on an unhinged, Junior-style rant with the host trying to get a word in: “People who are Democrats, Independents, Libertarians – they’re all coming out in droves to say they support the president! All they have done is magnify his excellence 10x more!” pic.twitter.com/7lQ9Xuszvb