If there is one thing that is not in short supply at Fox News, it’s raving, rampant, drooling stupidity. Whether expressed by their denial of science, their embrace of religious mythology, or their gullible acceptance of ludicrous conspiracy theories, Fox slathers on the dumb in thick layers. But today was one of those occasions that merit special recognition.

On Fox & Friends Sunday (video below), co-host Tucker Carlson questioned right-wing economist Peter Morici about the unemployment rate and how it is all President Obama’s fault that it isn’t lower (even though it has declined 25% since the highs produced by the Bush recession). Carlson and Morici agreed that one of the major contributing factors to the “crisis” is that Obama has artificially kept student loan rates down in a scheme to push the unemployment rate lower.

Indeed. This devious plot to help young people get an education must stop. We need to send them out into a difficult job market at the earliest opportunity so that employers can exploit their ignorance and inexperience with long hours, low wages, and few benefits. Why even bother with paying their way through high school? The last thing America needs is well-informed citizens with advanced degrees. We can get them from India at a significant discount. And if everyone were educated, who the hell would be left to watch Fox News? Other than, of course, the fine residents of southern red states: 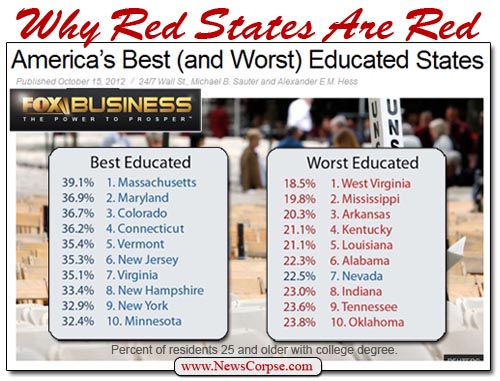 Ending this socialist abomination of financial assistance for students would give a huge boost to the economy. Corporations would become more profitable due to sharply reduced payroll expenses. Of course, they would also be hard pressed to find skilled workers, but they are already solving that problem by sending those jobs to China. This provides a related foreign policy benefit by forcing the Chinese to waste their money on educating their citizens.

There are other lessons in this for the bureaucrats in Washington. For instance, child labor laws are another major obstacle that keeps young people out of the labor market. And we have more than two million prisoners who could be put to work. And why should people who enlist in the military be taken off of the employment rolls? And what about all of those lazy senior citizens who so conveniently “retire,” so that they are no longer counted in the unemployment statistics (we’re on to you Obama)? For that matter, we could significantly reduce our Medicare and Social Security burden by making loafing seniors get off their butts or pay for their own heart bypass surgery and chemotherapy. For those unable to do so, America saves a fortune on health care when they die. We’d save billions on their frivolous prescription meds alone.

Thank goodness for Fox News who are the only media outlet with the courage to call out kids who are ripping off the nation by seeking to get an education. But then, Fox has long been at the forefront of the education hoax. They regularly disparage institutions of higher learning as bastions of liberal elitism. They campaign for defunding and/or privatization of public schools. They advocate home schooling as an alternative to trained and competent instruction. They oppose common sense programs to improve the efficiency of curriculum standards, even going to the extreme of portraying them as conspiracies to indoctrinate our children.

Clearly, Fox News has performed heroically in the battle against knowledge. And these remarks by privileged upper-cruster Tucker Carlson (whose parents were wealthy enough to pay for his education like the Founders intended) are further evidence of Fox’s commitment to preserving education for the rich and menial servitude for everyone else.