Just how determined is Fox Nation, the lie-riddled Fox News community web site, in its mission to slander anything and everything connected to liberal politics and media? Apparently they are so determined that they don’t care if they publish devastatingly negative representations of their pals down the hall at Fox News. 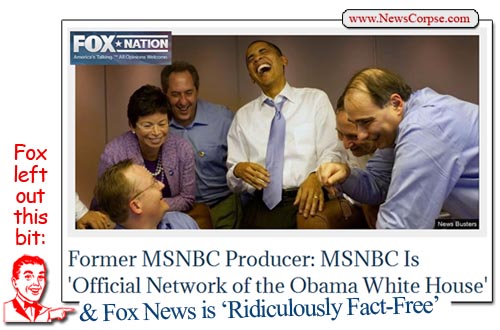 In a posting that must have given them goose bumps, the Fox Nationalists linked to an article at the uber-rightist NewsBusters that itself linked to an article at Alternet (Fox would never link directly to a liberal source). The Alternet piece was written by long-time media reformer Jeff Cohen and addressed the failure of the mainstream progressive media, and specifically MSNBC, to criticize President Obama for his actions taken against whistleblowers like Edward Snowden.

Capturing Cohen disparaging the network for which he used to work, was simply to compelling of a story to pass up. So Fox Nation slapped together a couple of paragraphs and topped it off with a headline that extracted the juiciest snippet in the column: Former MSNBC Producer: MSNBC Is ‘Official Network of the Obama White House.’ But in their haste (or more likely their ineptitude), they must have failed to notice that the passage they quoted was far more damaging to Fox News than it was to their intended target, MSNBC. Here is what Fox Nation posted about Fox News:

“…with Obama in power, a number of MSNBC talking heads have reacted to the Snowden disclosures like Fox News hosts did when they were in hysterical damage control mode for Bush – complete with ridiculously fact-free claims and national chauvinism that we’ve long come to expect from the ‘fair & balanced’ channel.”

It’s heartening to know that Fox’s audience will read that evaluation and, perhaps, have some of it stick in their Silly Putty brians. The intended swipe at MSNBC is rather mild in comparison. In fact, Cohen’s critique really just demonstrates that progressives are not as cultishly attached to MSNBC as wingnuts are to Fox – a fact recently documented by Gallup.