Gallup just released the results of a new survey on where Americans get the their news. Not much about the findings are particularly earth-shattering, however, a couple of points reveal something notable about the Fox News audience.

Gallup reports that 55% of respondents cite television as their main source for news. As usual, the breakdown of that data reveals that a fair chunk of the viewers selected Fox News as their go-to network (8%), with the remainder of the legitimate news networks dividing the majority of the audience who are not blinded by the right. In fact, more than twice as many respondents chose sources other than Fox.

Somehow, these results have produced a flurry of stories proclaiming that Fox is the most popular news network. The shallowness of that conclusion is typical of media analysts who can’t see past a simple list of possible responses.

The method Gallup used for their inquiry was to ask an open-ended question that leaves it up to the respondent to choose how much specificity to apply. The answer with by far the most mentions was simply the generic “Television,” which received 26%, and is more than three times the mentions of Fox. The only thing that this tells us about Fox is that their viewers are more cultishly attached to the network and will recite its name upon command.

The most revealing part of the Gallup survey was the question that broke down the responses by political views. In this category, Fox News registered some astronomically high numbers for bias. Fully 94% of respondents identified as Republican or leaning Republican said that Fox News is their main source for news. Conservatives chimed in at 79%. And a whopping 97% of those who do not approve of President Obama pledged their allegiance to Fox. None of the respondents on the left came within 30 points of that level of extreme partisanship. 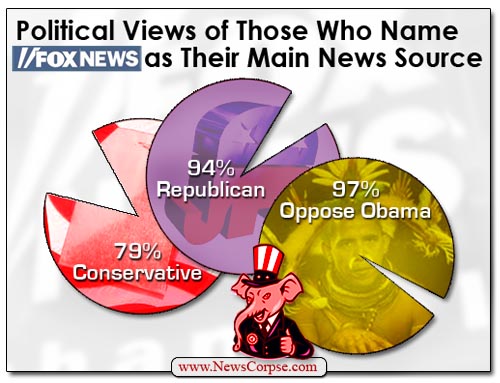 For more Fox-aganda bias, get the acclaimed ebook:
Fox Nation vs. Reality: The Fox News Community’s Assault on Truth

Surely Fox is aware of the character profile of their audience. And just as surely, their editors react to such market research by tailoring their programming to viewer preferences. Consequently, it should surprise no one that a network where more than 90% of its audience are conservative Republicans who hate President Obama spins every story in favor of the right and virulently against Democrats or anything remotely liberal. At this point, anyone denying the reality of this is desperately in need of intensive therapy and high doses of medication.