For a network that perpetually displays an “Alert” graphic regardless of whether they are reporting on a car bombing in Afghanistan or the opening of a Hooters in Tacoma, it is not surprising that Fox News’ hair-trigger Outrage Detector is stuck on “Apocalypse Now.” The standard facial expression of a Fox anchor at any given moment is an eye-bulging, jaw-dropping, sweat-dripping, fright mask of horror.

And so it was when the new issue of Rolling Stone magazine hit the streets. The featured story was about Boston bombing suspect Dzhokhar Tsarnaev, with the headline “THE BOMBER. How a popular, promising student was failed by his family, fell into radical Islam and became a monster.” Accompanying the story was a cover photo that has stirred more controversy than anything in the article. Many in the media, and particularly Fox News, condemned the photo as an attempt to glorify terrorism. There is just one problem. 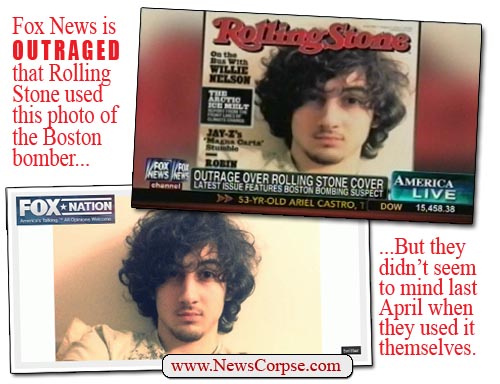 The picture that has rattled Fox News so furiously is the same one that Fox itself used back on April 19, 2013, to illustrate an article on their Fox Nation web site (See Fox Nation vs. Reality for an in-depth examination of its relentless dishonesty). That was just four days after the actual bombing. So if it’s true, as Fox says, that the photo turns Tsarnaev into a celebrity; that it glorifies a notorious killer; that it encourages others to follow in his footsteps; then Fox is not only guilty of the same things, they beat Rolling Stone to the punch by three months.

Rolling Stone’s decision to publish a story about Tsarnaev is entirely consistent with their editorial practice. Contrary to their reputation as merely a music magazine, they regularly publish articles on politics, media and other current events. They have some of the best topical journalism and journalists anywhere (e.g. Matt Taibbi). And lest we forget, Hunter S. Thompson wrote for Rolling Stone. All in all, it is a far better source for news than Fox.

The complaints about the photo are comically inept. Fox News is just one of many outlets that make a ludicrous comparison of the Tsarnaev picture to one that Rolling Stone had of Jim Morrison. However, it really was no different than virtually every cover of the Rolling Stone where they feature a headshot of the subject of the issue’s feature story. The only similarity between the two covers is that they both show young men with long, wavy, brown hair.

As of this writing, Fox News has broadcast their outrage on Fox & Friends, Happening Now, America Live, and Studio B. They have devoted more airtime to this story than to the “bombing” just averted in the senate over the so-called “nuclear option” to limit filibusters on presidential appointees. This story has even supplanted the Zimmerman verdict in terms of airtime. As for Fox Nation, they posted their own denunciation of Rolling Stone, decrying it as “DISGUSTING: ‘Rolling Stone’ Glamorizes Boston Bomber.” It would be interesting to see if the Fox Nationalists thought it was disgusting when they published the very same photo. [Update: Fox Nation changed their headline to “POISON FOR AMERICA: THIS IS ROLLING STONE.” It goes without saying that Fox is poison for America.]

Rolling Stone issued this response to the cover controversy:

“Our hearts go out to the victims of the Boston Marathon bombing, and our thoughts are always with them and their families. The cover story we are publishing this week falls within the traditions of journalism and Rolling Stone’s long-standing commitment to serious and thoughtful coverage of the most important political and cultural issues of our day. The fact that Dzhokhar Tsarnaev is young, and in the same age group as many of our readers, makes it all the more important for us to examine the complexities of this issue and gain a more complete understanding of how a tragedy like this happens.”

[Update] Fox News is now hyping some new photos taken by a police officer when Tsarnaev was apprehended. They say that this is the “REAL” Tsarnaev. OK, then. Suppose Rolling Stone had used this picture. Would that have made everything better? I don’t think so. 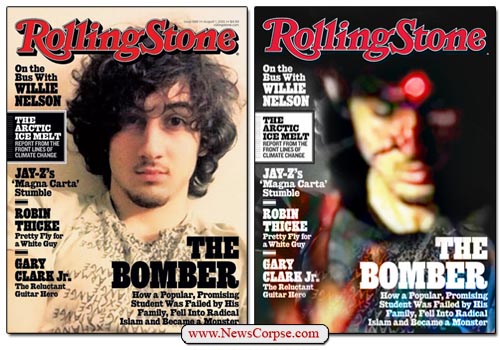