President Obama made a surprise appearance in the White House press briefing room this morning to express his thoughts on the Zimmerman verdict and related matters including race and law. Fox News didn’t waste any time to begin smearing the President for having the gall to communicate to the American people his feelings on these subjects. 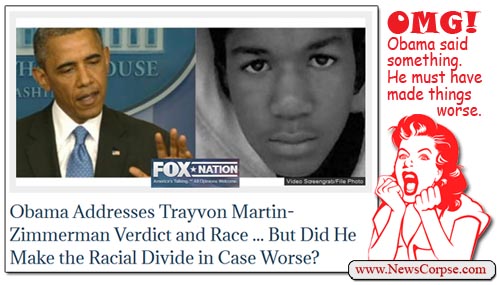 Apparently, the all too predictable hate mongers at Fox’s community web site, Fox Nation of Lies, believe it is appropriate for everyone to have an opinion on this case except for the President of the United States. Fox has already published commentaries from professional Obama-haters Sean Hannity, Charles Krauthammer, John Lott, Mark Levin, Rich Lowery, and more. But when the Obama speaks for himself, Fox leaps into full Obama Derangement Mode and speculates that his words alone are making things worse. And that’s after repulsive suggestions from the wingnut crowd that any criticism of the verdict was the work of “race hustlers”; that if anything happened to Zimmerman there would be blood on the hands of Obama, Eric Holder, and Al Sharpton; that advocates for Trayvon Martin were likely to incite riots across America; that Martin was a drug-addicted, thug who was responsible for his own death. And they don’t think that those statements will make things worse?

Obama’s comments demonstrated a breadth of understanding and compassion that these rightist instigators could never imagine. He made the events personal to many Americans at the same time as he reflected on the sort of solutions that should be considered. Here are some excerpts:

“You know, when Trayvon Martin was first shot I said that this could have been my son. Another way of saying that is Trayvon Martin could have been me 35 years ago. And when you think about why, in the African American community at least, there’s a lot of pain around what happened here, I think it’s important to recognize that the African American community is looking at this issue through a set of experiences and a history that doesn’t go away.

“I think the African American community is also not naïve in understanding that, statistically, somebody like Trayvon Martin was statistically more likely to be shot by a peer than he was by somebody else. So folks understand the challenges that exist for African American boys. But they get frustrated, I think, if they feel that there’s no context for it and that context is being denied. And that all contributes I think to a sense that if a white male teen was involved in the same kind of scenario, that, from top to bottom, both the outcome and the aftermath might have been different.”

“For those who resist that idea that we should think about something like these “stand your ground” laws, I’d just ask people to consider, if Trayvon Martin was of age and armed, could he have stood his ground on that sidewalk? And do we actually think that he would have been justified in shooting Mr. Zimmerman who had followed him in a car because he felt threatened? And if the answer to that question is at least ambiguous, then it seems to me that we might want to examine those kinds of laws.”

The President also spoke about how things have improved over the years, but that there is still more to be done. How anyone could argue with these comments is mystifying. But how Fox can go even further than disagreement to assertions of exacerbating the problem is just plain absurd. It can only be explained by recognizing that Fox is fully vested in disparaging Obama regardless of what he does or says. And that being the case, it is safe to simply disregard anything Fox says about anything. We already know what their opinion is and we know that they are composing their attacks even before the President finishes speaking.

Media Matters has compiled a collection of truly revolting responses to the President’s remarks.