On his Friday program on Fox News, Sean Hannity invited Martin family attorney Daryl Parks on to discuss the aftermath of the Zimmerman trial and verdict. The interview itself was uneventful, with Hannity arguing throughout that Martin was responsible for his own death. However, when Fox posted the video online it featured a cover photo and headline that had nothing whatsoever to do with the interview. 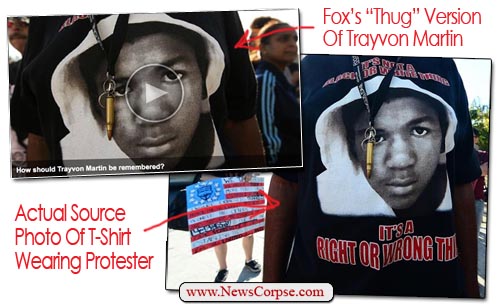 The headline was a question, “How Should Trayvon Martin Be Remembered,” that was never asked or addressed in the interview at all. The entire segment was a rehash of the arguments presented in the trial and Hannity’s concurrence with the defense position. Where Fox came up with the notion that Martin’s legacy was relevant to the video is a mystery.

Nevertheless, Fox attached the unrelated headline to a photo that cast Martin in a decidedly negative light with a bullet hanging prominently over his face. That photo was also unrelated, and unnecessarily incendiary, as it did not appear anywhere the video. The purpose of this visual messaging was clearly to implant a memorial image of Martin as inherently violent.

After conducting a little research, I discovered the source photo that Fox had used. Their editors had cropped it to feature a close-up of Martin’s face and the bullet. But the original picture plainly shows that the photo was of a t-shirt being worn by someone attending a rally in support of justice for Trayvon. The bullet was an accessory worn by the rally participant and had nothing to do with Martin. Furthermore, contrary to the impression given by Fox’s biased photo editing, the t-shirt also had a message of peace and understanding: “It’s not a black or white thing. It’s a right or wrong thing.”

This sort of graphic editorializing is nothing new for Fox. Even specifically with regard to this story, Fox News had once posted a photo that they had deliberately altered to make Martin appear more sinister.

The obvious racist intentions of Fox News literally scream out at you in both of these photo incidents. They are playing to the emotions of their audience that is predominantly white, with only 1.38% of their primetime viewers being African-America. And that’s why they believe they can get away with this sort of blatant prejudice in the guise of remembering Trayvon.