President Obama spoke last week in a very personal way about the experience of many African-Americans in a society that has struggled for decades to achieve equality. He expressed his recollection of the sort of prejudice that is well known by the black community saying that…

For his honesty, the President was lambasted by mostly white pundits and politicians who heard a very different message in his words. They accused him sowing division, ripping the country apart, and in an especially perverse interpretation, of professing racism himself.

Not to be left out, African-Tea-merican Allen West weighed in with his own recollections of being a black child in the South:

“I am a black male who grew up in the inner city of Atlanta and no one ever followed me in a mall. I don’t recall any doors clicking when I crossed the street. And I never had anyone clutching their handbag when I got on an elevator. I guess having two awesome parents who taught me to be a respectful young man paid dividends.” 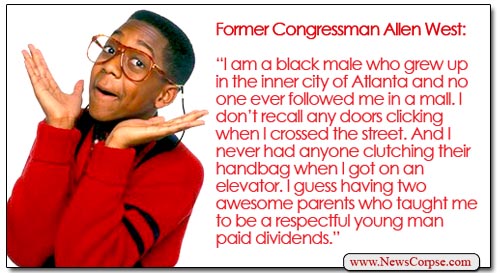 This actually explains a lot. Apparently West had a childhood that differed greatly from that of his peers. Having never been exposed to prejudice based on his race, it is somewhat more understandable how he could have grown up to be a mouthpiece for a racist movement and political ideology. Now we have a better idea of why West has placed himself at the front of a parade of white bigots who gleefully exploit him.

What is still difficult to comprehend is how West grew up in the environment that he describes. Could it be that the he was just so oblivious to the behavior of those around him that he simply didn’t notice the door-clickers and the handbag-clutchers? After all, while West claims to have never seen people follow him in malls, he does claim to have seen some eighty communists in the House of Representatives. Perhaps his cognitive ability is a little warped.

What point is West trying to make by noting his unique and improbable personal history? Is he asserting that other black men, including the President, are lying when they say they have been the subjects of prejudice? Does he think that there has never been a black man who was followed in a mall, or stopped by the police, or otherwise treated adversely because of his race? In West’s world there seems to be no trace of racism, and anyone who says otherwise is a liar.

Furthermore, West implies that his upbringing by “two awesome parents” is responsible for the fairy tale harmony he enjoyed growing up. By contrast he suggests that Obama’s single mother, and every other single-parent family, is the cause of rude children who deserve the harsh treatment they receive from bigots in malls and on elevators.

If only all black kids were well behaved, respectable young men, there would never be any racism. On that, West agrees with Ted Nugent who recently said that the solution to racism was for African-Americans to be clean, well-spoken, and not so damn lazy. He never mentioned that white people should be less hateful. These are the sort of repugnant, easy answers that racists wallow in because it places the blame on the victims. And that is precisely what West is doing with his utterly unbelievable personal history.

11 thoughts on “Allen West: There Never Was Any Racism Ever. What’s All The Fuss?”