Reports from our London bureau are confirming that a couple of members of the British royal family have in their custody a male infant who they are claiming to be an heir to the throne of England. The child arrived this morning, although there is no evidence of an entourage or a means of transportation. Witnesses report that it was not there one moment, and then it was there the next. 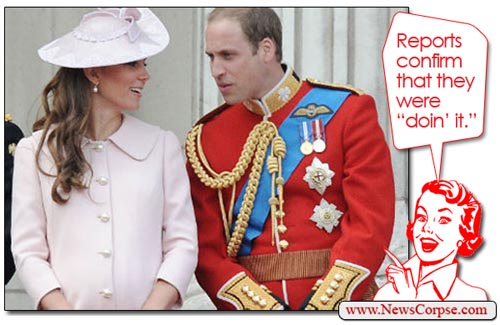 Scientific experts have developed a consensus theory that is being met with some skepticism by Republicans in the U.S. who reject any explanation that doesn’t involve divine intervention or result in lower corporate taxes. The scientists’ description of the phenomenon was summarized in a paper submitted to a British medical journal:

“Our research indicates a probable relationship with an interaction between the parties in the royal family,” wrote Dr. Ezekial Bogsworth-Kent of the University of London. “Empirical testing suggests that Prince William inserted his penis into the vagina of Lady Kate and maneuvered it inwardly and outwardly in successive motions until there was an eruption of spermatozoa. A chemical reaction subsequently occurred that resembles fertilization. It is difficult to conclude with certainty the sequence of events because they appear to have taken place some eight or nine months prior to the appearance of the mystery infant.”

The media has dispatched considerable resources to London in an effort to uncover the details of this affair, and its political and social ramifications. There are many unanswered questions, but diligent journalists are hard at work pressing their sources to acquire the information that is critical to a curious world. The news networks have ceased coverage of all the other trivial matters that generally consume their airtime. In the several hours since the announcement of the infant there has been no mention of George Zimmerman, Benghazi, immigration, Edward Snowden, or the economy and jobs.

The priority afforded to this breaking news is understandable when viewed in light of the international significance of this event. After all, this infant, in a couple of decades, may or may not be elevated to an entirely ceremonial role as the king of an empire over which he would have no power whatsoever, other than to spend millions of the tax dollars collected from struggling British citizens on his lavish lifestyle. So it is obvious why the media would focus so intently on this singular spectacle that is repeated tens of thousands of times every day by less consequential peasant folk.

The American press corps is no less obsessed with this distinctly British story because, despite the fact that the United States engaged in a bloody war of independence in order to cast off the shackles of monarchy, they are still entranced by royal melodrama that has no impact on them at all. So for the next few hours (days?) don’t expect to hear anything on the news that addresses the myriad problems America faces with its economic and social tribulations. There is a funny looking baby in a palace thousands of miles away that is far more important. 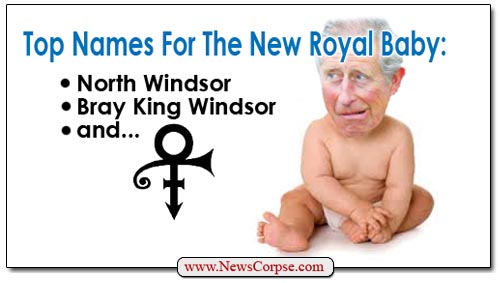