The diseased minds at Breitbart News and David Horowitz’s Freedom Center are joining together to fill what they perceive as a void in media criticism. Not satisfied with the efforts by richly financed conservative operations like the Lie Factory of Fox Nation, the Media Research Center’s NewsBusters, the Washington Free Beacon, or Breitbart’s own BigJournalism, this new cabal is forming with the unmistakeably hostile mission to…

“…unmask leftists in the media for who they are, destroy their credibility with the American public, and devastate their funding bases.”

Oh my. That’s sounds ominous. But if anyone is capable of venturing down such a repugnant path, it’s BreitBrat Ben Shapiro, the editor-at-large of Breitbart News. Shapiro’s record of keeping the media in check includes falling for a fake story about Chuck Hagel; bashing fact-checkers; whining when Republicans are vetted; and exposing the socialist propaganda of Sesame Street.

As for BreitBrat Ben’s partner, David Horowitz, he is a notoriously racist fringe conservative who believes that slave labor has benefited contemporary African-Americans. He also publishes “Jihad Watch,” which has labeled President Obama a “practicing Muslim.”

The new TruthRevolt project describes itself as “a conservative counterpunch to Media Matters, the Obama-linked organization that focuses on silencing conservatives in the media.” Of course, there is no Media Matters link to Obama offered by the BreitBrats, nor any evidence that they have ever silenced any conservative. What right-wingers regard as silencing is really just getting caught saying what they actually believe. That’s all that Media Matters does.

Breitbart has been after Media Matters for a long time. They have challenged the tax-exempt status of Media Matters; accused them being anti-Christian and anti-American; charged that they get their marching orders from the White House, George Soros, or any other convenient rightist bogeyman. Even their hallowed leader, St. Andrew, has taken cheap shots at Media Matters and its founder, David Brock. He published an absurd article alleging some sort of conspiracy by the media to hide an old photograph of Brock that he characterized as narcissistic and homoerotic. But he could have been talking about himself and the photos he posed for in Time Magazine: 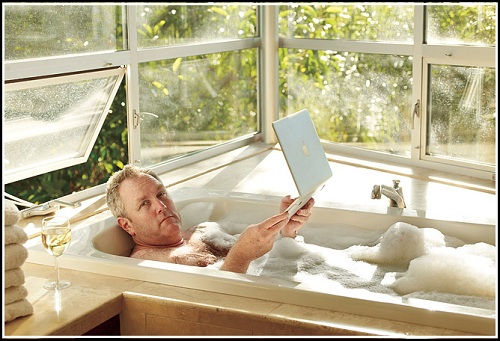 Breitbart’s destructive tendencies are well documented. He once swore to “bring down the institutional left” in three weeks. He’s more than four years overdue. Now his successors are nursing the same obsessions. And as usual they are incapable of providing a single example of anything that Media Matters has done that was incorrect or deserving of criticism. Their unambiguous goal (as they admitted above) is to tear down an organization that does nothing more than document the conservative bias in the media. It is a plainly articulated, well-financed, censorious revolt against truth – hence their name.