Is it a slow news day, or just another day at Fox News? For some reason Fox is exposing their wacko side (again) over at their community web site Fox Nation (See Fox Nation vs. Reality for an in-depth look at the site’s blatant dishonesty). In two days they have posted two articles about fishy fringe groups proposing phony “Articles of Impeachment” against President Obama.

The first thing to note is that such articles cannot be drafted by citizens. It is a legal process that begins in the House of Representatives. So these charades have no meaning other than as political publicity stunts. Secondly, the allegations must assert criminal wrongdoing that amount to “high crimes and misdemeanors.” Being unsatisfied with explanations about what took place at Benghazi, or opposition to a health insurance law, that was passed by congress and upheld by the Supreme Court, do not rise to that standard.

Nevertheless, Fox News is going all out to promote these absurd spectacles. The first was posted yesterday with a headline that shouted “Black Citizens Group Files ‘Articles of Impeachment’ Against Obama” 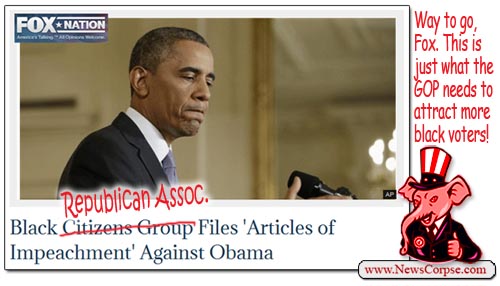 In fact, the group was actually the National Black Republican Association, a shadowy organization with no visible means of support who exist primarily to advance false claims about the historical relationship of Democrats and Republicans to the black community. For instance, they produced radio ads and billboards declaring that Martin Luther King was a Republican, a claim that is demonstrably untrue.

The Fox Nationalists sourced their story to Watchdog.org, a division of the Franklin Center which is financed by the Koch brothers as an “investigative” journalism service. Both Watchdog and the Franklin Center espouse rabidly right-wing/Tea Party propaganda disguised as news reporting – much like Fox News.

The next impeachment article was posted today in the form of a video “trailer” for a new book by noted birther Aaron Klein. The book is titled “Impeachable Offenses: The Case for Removing Barack Oabam from Office.” It suffers from the same deficiencies of law and logic as the NBRA’s article. 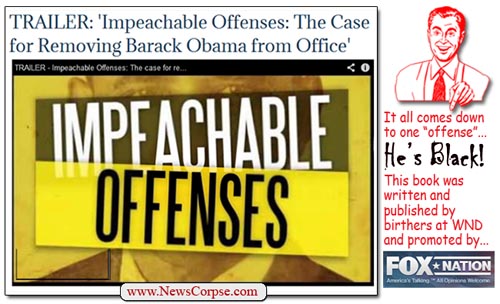 Klein’s book was published by the book division of WorldNetDaily, the far-right home of the wildest conspiracy theories on the net, many of which are manufactured by Klein himself. In addition to a variety of birther myths, WorldNetDaily is the source of such reputable reporting as terrorists building “boob” bombs (seriously, you have to see the graphic), and Obama using the movie “The Butler” to incite race wars. The site features such distinguished contributors as Ted Nugent, Victoria Jackson, and Donald Trump.

So that’s two articles in two days planting the asinine idea of impeachment in the minds of Fox’s gullible and glassy-eyed audience. Both are from sources that represent the dregs of the uber-rightist conspiracy swamps with no credibility whatsoever. I can’t wait to see what the Fox Nationalists post tomorrow. And Fox wants people to regard them as a reputable news organization? Yeah, sure.

11 thoughts on “IMPEACH, IMPEACH: A Frenzy Breaks Out At Fox News”