A report was broadcast on Fox News today (and published on FoxNews.com) that purported to be an examination of the congressional earmarks of the presidential candidates. As one might expect, the report fell something short of what a reasonable person would call “fair and balanced.” 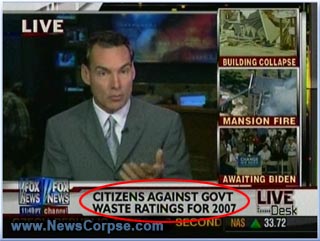 Correspondent William La Jeunesse’s report only went into detail on earmarks requested by Barack Obama and Joe Biden. The story came complete with on-screen graphics to illustrate his points. But no numbers or graphics were provided for John McCain or Sarah Palin. This deliberately one-sided hit piece would be bad enough all by itself. Unfortunately, the worst part is revealed with a little further investigation. And it gets much, much worse.

The source Fox News used for the research in the story was Citizens Against Government Waste (CAGW), an organization that Fox described as a “nonpartisan, nonprofit group.” In fact, the group is far from nonpartisan. It has publicly endorsed McCain for president and donated $11,000.00 to him or to PACs he controls. CGAW has also worked as a shill to attack McCain opponents in a manner that may have violated election law. It has also been connected to convicted lobbyist Jack Abramoff.

On the board of CAGW is long-time McCain associate, Orson Swindle. They met as cell mates in a North Vietnamese prisoner of war camp where Swindle says that he and McCain “slept side-by-side for almost two years.” Swindle is now the McCain campaign’s veterans liaison and was appointed to his campaign Truth Squad a couple of months ago. He spoke last week at the Republican National Convention. He is also a senior policy advisor at the big DC lobbying firm of Hunton & Williams whose clients include American Express, Eli Lilly, GE, Microsoft, and Wal-Mart.. These duties violate McCain’s own policy of not allowing people working for “independent entities” to serve on his campaign staff.

Taking these facts into account, it should come as no surprise that CAGW awarded McCain a 100% rating, while giving Obama 10% and Biden 0%. The group claimed that Sarah Palin was not included because the ratings evaluate only members of Congress. But they did rate Alaska’s performance in their 2008 Congressional Pig Book (Uh oh, they’re calling Palin a pig) where they said that “Alaska led the nation with $556 per capita ($380 million).” In the 2007 edition they reported that Alaska and Hawaii “have been the top two states in pork per capita every year but one since 2000.” None of that was included in Fox’s report on television or online.

I’m not sure why it still shocks me to hear that Fox News broadcasts fiercely biased reports that abandon every tenet of journalistic ethics. But citing an organization that is known to be supporting McCain, identifying it as nonpartisan, and using it to pummel Obama, is such a blatantly dishonest and disreputable act that in a just world their press credentials would be immediately revoked. It is just infuriating to know that Fox will get away with this time after time without paying a price for their unscrupulous and unprofessional conduct.

The only demonstrated way to effectively punish Fox is to deny them access to Democratic lawmakers, candidates, and officials. When we are united in embargoing the network they have been noticeably distraught. They may puff up their chest and threaten us, as Bill O’Reilly did when he said that “If you dodge us, it is at your peril.” Or they may invoke juvenile tactics like Chris Wallace’s Obama Watch to bully us into compliance. But that behavior just affirms the effectiveness of staying away. They were obviously troubled and desperate, and they can’t maintain a pretense of balance if Democrats refuse to certify their bias by appearing on their tainted air.