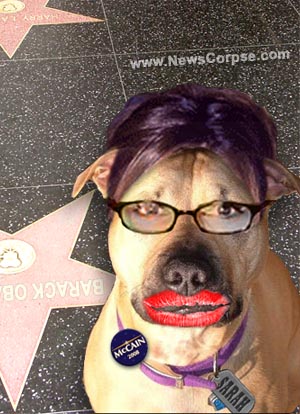 For months now, John McCain has been belittling Barack Obama as inexperienced and unprepared to be president. Much of the criticism has targeted his speech making prowess and charisma, which McCain characterizes as the hollow trappings of celebrity. There was even an ad that attacked Obama as the “biggest celebrity in the world,” and juxtaposed his image with Britney Spears and Paris Hilton. McCain himself said that:

“The bottom line is that Sen. Obama’s words, for all their eloquence and passion, don’t mean all that much.”

But now, the day after Alaska Governor Sarah Palin, the “pit bull in lipstick,” debuted at the Republican National Convention, the campaign, the Party, and the media have all adopted a new view of celebrity. While it was a pejorative when directed Obama, for Palin it elicits the sort of applause and acclaim that is ordinarily reserved for … well, celebrities. Consider this sampling of the press:

Chris Wallace – Fox News: “I don’t think it’s overstating it to say being right here on the floor that a star was born tonight. A new star in the political galaxy.”
Michael Barone – U.S. News & World Report: “Sarah Palin’s speech to the Republican National Convention last night was a home run. A star was born.”
Margaret Carlson – Bloomberg: “On Wednesday night, a political star was born.”
William Kristol – New York Times: “A star is born.”
Karen Breslau – Newsweek: “A populist star is born.”
Art Moore – WorldNetDaily: “A star is born. The country ‘fell in love with Sarah Palin tonight.'”
Rich Lowry – National Review: “After that, you feel like asking not: How did she rise so fast? but Where has she been so long?”

And that’s not all. CNN’s Wolf Blitzer and Anderson Cooper, MSNBC’s Pat Buchanan and Joe Scarborough, and Fox News’ Brit Hume and Dick Morris, all used some variation of the “Star is Born” theme to describe Palin’s debut. And all it took was one speech for the GOP establishment, and the media at large, to succumb to the charms of a heretofore unknown political neophyte who, two years ago, was the mayor of Wasilla, Alaska, population 6,000. One speech to transform the perception of this newcomer into someone qualified to be a 72 year old heartbeat from the presidency. Just one extensively rehearsed, meticulously stage-crafted speech.

So now Republicans, who demeaned Obama for attracting positive attention and adoring fans, is boasting that they have their own idol at whom to stare glassy-eyed. Now the media is abuzz with glowing notices for Palin’s opening night. And yet the McCain/Palin camp is still bashing the press as biased, despite the unfiltered adulation that is being blasted at them from all sides. The press is being castigated for doing what any professional journalist would acknowledge is their job. Politico’s Roger Simon is one of the very few who see the irony in this. He penned a must-read column that sarcastically explains “Why the media should apologize.”

“We have asked pathetic questions like: Who is Sarah Palin? What is her record? Where does she stand on the issues? And is she is qualified to be a heartbeat away from the presidency? […] Bad questions. Bad media. Bad.”

In her address last night, Palin spoke of “dramatic speeches before devoted followers” and wondered what happens “when the cloud of rhetoric has passed… when the roar of the crowd fades away.” But no one in the press observed that she might as well have been talking about herself, even more than Obama. After all, Obama has been on the campaign trail for 19 months developing the devotion of his supporters, but Palin has achieved the task after a grand total of four days and one speech. Four days during which she has been sequestered from the public by the campaign which has not offered her up for a single press conference. Despite the many controversies swirling around her appointment, she has so far only sat for an interview with the hard-hitting People Magazine. There is talk that she will appear on a Sunday morning news program this weekend. Guess which one. Fox News Sunday!

The result of all of this is that the two arguments McCain has used most aggressively against Obama – his experience and his celebrity – have both been rendered inert. Palin has less experience and, contrary to Obama’s multitude of stirring public addresses, Palin still has – and, I repeat – just one speech. The fanatical fawning of faithful Republicans is bad enough, but not unexpected. From the media, however, it is just plain creepy. Is anyone paying attention?

5 thoughts on “McCain And Palin: Stars In Their Eyes”