Is there a double standard in the wingnut press for criminal activity? Well, whenever a Democrat is accused of littering, the conservative slander machine cranks up to full volume and escalates the crime to treason while insisting, without evidence, that President Obama masterminded the whole affair. However, if a Republican is found to have committed real and serious violations of the law, the Right Guard springs into action to either dismiss or deny the crimes, no matter how strong the evidence. The malfeasance in office of Republican governors Chris Christie of New Jersey, and Bob McDonnell of Virgina, are good examples of conservative lawbreakers who get taken under the protective wing of the rightist media when trouble arises.

Additional examples include a trio of conservative crooks who have recently been caught misbehaving, and in all three cases they have been treated as victims of a White House cabal determined to clamp down on the liberty of well-meaning patriots. The lie-riddled Fox Nation website went so far as to ask “Is There A COORDINATED VAST LEFT-WING CONSPIRACY?” They never bothered to answer the question or provide any support for the theory, but they did plant the notion into the minds of their already paranoid audience that these poor souls are suffering under the boot of tyranny: 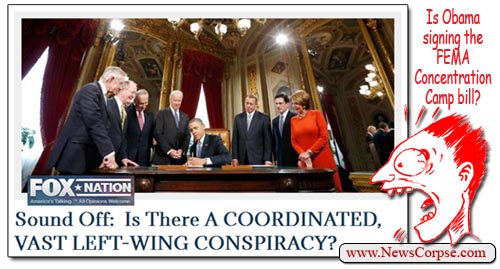 As the director of the bitterly anti-Obama crocumentary, “2016 Obama’s America,” D’Souza has demonstrated his ego-soaked self-absorption by whimpering about not getting the Academy attention he so fervently believes he deserved. And if that weren’t repugnant enough, he also insulted the filmmakers who did get Oscar nods.

Yesterday D’Souza was indicted for breaking campaign finance laws. The allegation states that he solicited people to donate up to $20,000 to a Republican senate candidate in New York, then reimbursed them for the expense. Federal law prohibits any single donor to contribute more than $5,000 to a candidate in any election cycle.

Today D’Souza is whining about being harassed by the feds and Fox News led with a headline that asked whether he was the subject of “selective” prosecution. But if he doesn’t want to be bothered by law enforcement, he should try not breaking the law.

The Friends of Abe are a clandestine group of Hollywood celebrities who advocate on behalf of conservative politicians and issues. Many of them keep their identities secret because they fear being discriminated against by liberals in “The Biz.” Some of the conservative actors who claim to be victims of oppression include Kelsey Grammer, Bruce Willis, Tom Selleck, Patricia Heaton, and Clint Eastwood.

Now a report says that the group is being asked by the IRS to certify their non-political status in order to be granted a tax exemption for donors. That led the head of the group to the friendly studios of Fox News to complain that they were being targeted for their political beliefs. Well, that’s actually true. It is because of their obvious involvement in politics that the IRS is legally obligated to give them further scrutiny. There is ample evidence of their partisan activities, and if they don’t want to be challenged on that basis, they should not be so overtly partisan.

Fancying himself an investigative reporter, O’Keefe has made a career of lying about progressive people and organizations. His exploits already got him in trouble with the law when he was arrested and convicted for unlawful activity in the office of a U.S. senator in Louisiana. His infamous videos have been proven to be deceitfully edited in order to smear the reputations of his victims. His best known crusade against ACORN proved nothing and the group was never found to have broken any law. However, O’Keefe was forced to pay a $100,000 settlement to a former ACORN employee who sued him for defamation.

Typical of the whiny personality he exudes, O’Keefe is now complaining about a summons he received from the Department of Labor in New York to ascertain whether he was properly paying taxes for the state unemployment insurance fund. O’Keefe has called the request a witch hunt, but he has also said that he will be relocating to New Jersey. Is that his way of evading justice? If he is so certain that his finances are in order, he should simply provide the exonerating documents and go back to libeling the liberals he despises.

There was a time when Republicans were known as the “law and order” party. But when you have characters like these getting caught for unlawful conduct, and their accomplices in the media excusing and/or forgiving their behavior, it is impossible to take seriously their claims of innocence and purity. They have a deep aversion to taking accountability for their actions. And in avoiding responsibility, they resort to the most childish form of griping and blaming others for their woes. The GOP has flipped from being the “law and order” party to being the “whine and blame” party.