Finally, Oscar Sunday is right around the corner. And what better time for a right-wing loser to whine to the press about how the Academy failed to recognize his brilliance and shower him with undeserved praise?

Dinesh D’Souza turned his critically reviled book of falsehoods about President Obama into a crockumentary called “2016: Obama’s America.” While the film found an audience of gullible Teabaggers anxious to consume anything derogatory about the President, more sensible viewers found the film to be riddled with lies and fabricated mythology.

Not surprisingly, a so-called documentary that failed to adhere to the most basic tenets of truth, also failed to garner much support for recognition by the Academy of Motion Picture Arts and Sciences. Thinly veiled propaganda screeds that have no factual basis rarely win Oscars.

Rather than exhibiting some measure of dignity and enjoying the financial rewards of making a film popular with conspiracy nuts, D’Souza has chosen to blast the Academy and its members as hopelessly biased for not seeing what a humongous slab of talent he is. Even worse, D’Souza slammed the filmmakers who actually did produce works of quality that earned them Oscar nominations.

D’Souza: I join most Americans in leaving them in deserved obscurity. I haven’t heard of any of them, and like most people, I haven’t seen them.

What class. And what a demonstration of intellectual integrity he shows by disparaging films he admits he has not even seen. Then again, what more should we expect from a man who was forced to resign as the head of King’s College (a Christian institution) for having an affair, which he denied even as he admitted that he was engaged to a woman who was not his wife. 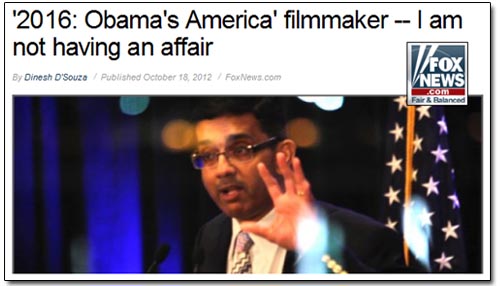 In the hypocritical world of sanctimonious piety peddlers, preachers embroiled in sex scandals, like Jimmy Swaggart and Ted Haggard are forgiven. Politicians like Larry Craig, Mark Sanford, and David Vitter, who have had to explain their own adulteries and whore mongering, know that Fox News will always be there to defend them. Every conservative sinner is granted a “Get Out of Hell Free” card. Too bad they don’t have their own Oscars (yet) to award themselves statuettes for Best Smear Job by a Dishonest Hack.