Today the highly [er, make that barely] anticipated Superbowl interview of President Obama by Bill O’Reilly of Fox News (video below) went off pretty much how you might expect. Hoping to cover matters of importance to the special broadcast’s audience, the irascible O’Reilly jumped right into the discussion with an issue that has been dormant for weeks and went from there to some of the most overwrought pseudo-scandals that Fox has failed miserably to ignite, despite countless hours of effort. 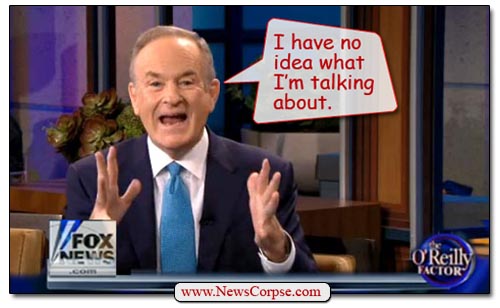 O’Reilly led off by asking the President about the website glitches that plagued the Affordable Care Act (aka ObamaCare ) when it launched four months ago. He inquired why Obama hasn’t fired his Secretary of Health and Human Services, as if she had personally written the faulty code. And he asked about Obama’s prior statement that “if you like your plan you can keep it.” Of course, Obama has answered all of these questions numerous times, so O’Reilly’s dredging them up could not possibly have produced any new information.

The next subject was Fox News’ favorite mantra: BENGHAZI! This issue is even older than the website failure. The unique angle O’Reilly sought to mine involved the claims of “some people” who O’Reilly said believe that the White House refused to describe the attack as terrorism in order to help his reelection campaign. There’s just two small problems with that: 1) O’Reilly doesn’t explain how that would help the reelection effort. and 2) The President did describe the attack as terrorism the day after it occurred. Nevertheless, O’Reilly insisted that Obama explain why there are people who believe the false premise. Obama had an excellent explanation saying that “They believe it because folks like you are telling them that.”

Next up for O’Reilly’s inquisition was the infamous allegations that the IRS had targeted Tea Party groups and other conservative organizations who applied for non-profit status. Obama pointed out that, despite extensive hearings in Congress, no evidence has been produced to support the charges. In fact, the evidence increasingly reveals that both liberals and conservatives were given scrutiny by the IRS, as they should be. Obama further noted that, just as with Benghazi, “These kinds of things keep on surfacing in part because you and your TV station will promote them.”

Finally, O’Reilly read a question that had been sent to him by a viewer. The viewer wanted to know “Why do you feel it’s necessary to fundamentally transform the nation that has afforded you such opportunity and success.” Seriously? This idiotic bit of tripe has been swirling around the conspiracy theorist community since the first Obama inauguration when it was posited by Glenn Beck. These brain-damaged twerps can’t seem to grasp that a turn of phrase during an election campaign is not a coded reference to some nefarious plot to unravel the American Dream. The only meaning was that then-candidate Obama intended to repair the damage that the previous eight years of President Bush had caused.

So this was the entirety of O’Reilly’s interview. It was a rehashing of tired rumors and slander. Given this platform to reach an unusually large audience, O’Reilly wasted it with bitterly partisan nonsense. He could have addressed some of the issues that are currently on the minds of the American people, like the economy and jobs, immigration reform, the Keystone XL Pipeline, or the situations in Syria and Iran. He could have dug deeper into the President’s recent State of the Union speech and sought to get him to elaborate on income equality. He might even approached the tribulations of New Jersey governor Chris Christie, or legalizing marijuana.

But no. O’Reilly stuck with the Fox News manufactured scandal mongering related to ObamaCare, the IRS, and as always, Benghazi. As a result, the interview was a pitiful waste of time and more proof that Fox News doesn’t have the first clue about what constitutes journalism. But rest assured they will find some sentence fragment in the segment that they will inflate into humungous proportions that will produce buckets of raw outrage by Monday morning.