The Republican Party has been engaged in a prolonged and determined campaign to suppress the votes of citizens whom they believe are inclined to vote for Democrats. Their disingenuous claims to be battling voter fraud are exposed as lies by the fact that they cannot certify any significant incidence of unlawful voting, and the solutions they propose to the non-problem all seem to serve as impediments to voting by youth, minorities, seniors, and the poor. These are all commonly regarded as Democratic constituents, but I’m sure that’s just a coincidence.

Conservative media, and especially Fox News, has been a full partner in this voter suppression effort. They have openly taken positions in support of the GOP’s discriminatory initiatives and given a platform to right-wing partisans who advocate for purging the electorate of Democratic voters. The issue has become a near obsession for the rightist media machine as it seeks support for restrictions that require photo IDs, reduce polling places and hours of operation, and limit the ability of independent organizations to register voters.

All of this is done in the name of cracking down on illegal election activities. Which makes it all the more ironic that Fox News is now defending someone who has been indicted for actual election fraud, Dinesh D’Souza. As a veteran of right-wing punditry, D’Souza is a frequent guest on Fox News and is the writer and producer of the anti-Obama crocumentary, “2016: Obama’s America,” based on his own widely debunked book, “The Roots of Obama’s Rage.”

D’Souza was recently indicted for felony violations of election finance laws. He is alleged to have solicited people to make donations to a candidate for the senate and then reimbursing the donors as a scheme to exceed contribution limits. The response to this by D’Souza’s pals at Fox News was to assert that the prosecution is all a part of a plot by President Obama to silence his critics. It’s an absurd and unsupported claim that doesn’t explain why Obama would go after a minor figure like D’Souza, whom few Americans have heard of, while allowing more prominent critics like Rush Limbaugh to remain free. Nor does it account for the fact that the same Justice Department that indicted D’Souza also convicted a Democrat for the same crime. 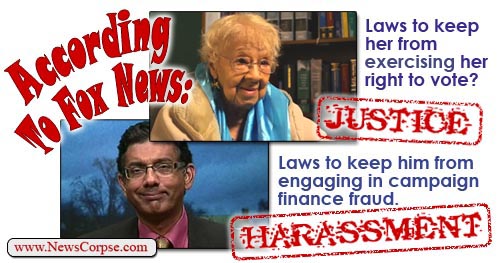 The attempt to whitewash D’Souza’s criminal activity included a guest spot on Sean Hannity’s program. Hannity called D’Souza “the latest victim to be targeted by the Obama White House,” without any evidence of White House involvement. Then Hannity gave D’Souza an opportunity to rebut the charges made against him. D’Souza said…

“Well, as you can imagine, it’s been quite a week. I can’t really talk about the case but I will say that I’m determined to continue my work. I’m making a big film called “America,” which is about the greatness of America that’s gonna come out for July 4th this year. So I just want to say that I’m undeterred and I’m marching full speed ahead.”

The notable thing about that response, other than its shameless self-promotion of a future project, is that D’Souza never once denied the charges against him. While he may not be able to discuss the details of the case, there is no prohibition on proclaiming his innocence. It is curious, to say the least, that when given the opportunity to do so in a friendly environment, he would so conspicuously refuse. Then when Hannity inquired whether D’Souza considered the indictment to be political retribution, D’Souza said…

“Well, I will say that “2016” was a film that does seem to have gotten under President Obama’s skin. And the reason for this is that it wasn’t just a critique of ObamaCare or his policies, but I, in a sense, went into Obama’s world and also into Obama’s mind. There I was at the Obama family homestead in Kenya. I interviewed his brother. And, of course, we advanced the thesis that here is a traumatized, and somewhat of a messed up guy who is, in a way, haunted by the dreams of his father, the topic of his own biography. There was a rant against the film on Obama’s own website, that is BarackObama.com, so we know the film rattled him. We know that it upset him. And whether this is some kind of payback remains to be seen.”

Once again, there is no denial guilt. But there is speculation about payback that is not backed up by any facts. There are also some rather ego-drenched assertions that his cinematic screed had a prodigious impact on the President’s state of mind, when in all likelihood Obama never saw it or cared about it. He’s a little too busy being the leader of the free world to be concerned about an amateurish hit piece by a disreputable hack.

Over at Fox’s community website, Fox Nation [see the ebook Fox Nation vs. Reality for documentation of their brazen dishonesty], they posted a link to an article by Charles Hurt on Breitbart News that went even further in defense of the criminal activities alleged against D’Souza. Hurt even conceded the question of D’Souza’s guilt and still excused him saying that he “very well may be guilty of a few winks and nods that wound up violating limits on campaign contributions’ The “few winks and nods” added up to more than $20,000 dollars in fraudulent donations. But the central theme of Hurt’s article is that the prosecutor, Preet Bharara, is some sort of White House enforcer assigned to rubbing out the President’s enemies. The article’s title calls Bharara a “hatchet man,” and Hurt’s first paragraph ominously intones that…

Bharara is the U.S. Attorney for the Southern District of New York, and supervises over 200 lawyers who handle hundreds of cases. He has presided over the recovery of a half-billion dollars in civil fraud cases. He has locked up numerous terrorists, narcotics traffickers, and violent gang members. Yet Hurt’s article cites only a couple of cases that he deems relevant to his theory that Bharara is Obama’s hit man. Neither of these cases were political in nature, nor did they involve any personal interest of the President. One case involved an Indian diplomat who allegedly lied about her employment and payment of a nanny. The other was a case where forty-nine Russians were charged with defrauding Medicare. In both cases Hurt seemed to imply that all of these lawbreakers should have been set free despite their crimes. And having made no logical connection to Obama, Hurt just seems to be praying that his readers are dumb enough not to notice what a laughably insipid argument he is struggling to construct. Since his readers are on Breitbart News, he doesn’t have to pray very hard. Hurt concluded by saying that…

“Certainly, Mr. D’Souza very well may be guilty. Same with the Russian diplomats – and perhaps the Indian attache really needed to be strip-searched. However, a filmmaker skirting campaign donation limits does not tear at the fabric of this nation of laws. Russians cheating our welfare system is not a constitutional crisis. A constitutional crisis that tears the fabric of this nation of laws is a federal prosecutor who uses his office to advance political vendettas.”

Hurt’s argument seems to be that any crime that he doesn’t regard as upending the Constitution should be dismissed. Therefore we should let all the murderers and drug dealers and embezzlers off the hook. Just think how much money we would save by shutting down the federal courts and virtually emptying the nation’s prisons.

Conservatives often portray themselves as being the party of law and order. However, the truth is that they only embrace the law when it serves their purposes, and they abhor it when it gets in their way. That’s why they advocate more laws that would deny a ninety year old citizen the right to vote if she doesn’t have a driver’s license. But they forgive, and even praise, a political crony who breaks the law in order to funnel money to right-wing candidates. It’s a perverse concept of justice that favors elitists and the corporations that they believe are people.

One thought on “Fox News May Be Anti Voting Rights, But At Least They’re Pro Election Fraud”