Once again, MSNBC has demonstrated its dominance over the stodgy CNN and the rightist snake oil of Fox News. MSNBC’s programming grew more than twice as much as Fox during 2008: 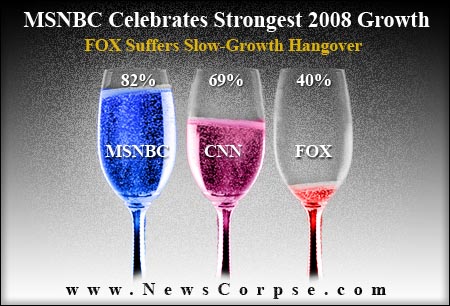 The fact that this was an election year raised the numbers of all of the players, but in the end Fox took its usual place at the bottom of the scale of growth. On the other hand, MSNBC was the only network to finish the year with more viewers post-election than their average for the year. That’s because their rate of increase far exceeded what was given back after November 4, when audiences predictably declined.

As the new year kicks off, the battle for cable news supremacy will only heat up. MSNBC will continue to rely on of its powerhouse one-two punch of Keith Olbermann’s Countdown and the Rachel Maddow Show. Both programs continue to drive the network’s growth. CNN is sticking with the status quo. Their schedule is little changed for the year, with the exception of adding Campbell Brown, who hasn’t really made her presence known.

Fox News, however, is making several changes that seem to be geared to digging an even deeper conservative hole. This year saw the hiring of right-wing stalwarts like Karl Rove, Judith Miller, and Mike Huckabee, as well as Foxocrats and Obama opponents Lanny Davis and Howard Wolfson. In addition to that, they are losing Alan Colmes and debuting what they call a new “pure” Sean Hannity solo show. I’m sure they are happy to have filtered out the contaminants. Hannity also signed a multimillion dollar contract renewal, as did Bill O’Reilly. Brett Baier, a reliable Fox ideologue, is succeeding Brit Hume as anchor of their signature news program, Special Report. And later this month will see the premiere of Glenn Beck’s new program on the network for which he was born to work. His obnoxious, immature, fact-free squealing will fit right in on Fox.

These uber-conservative reinforcements called in by Fox News suggest that they are preparing for a new offensive directed at the incoming administration of Barack Obama. It’s hard to see any other justification for such a hardening of their right flank when political winds are shifting in a more centrist, post-partisan direction. Consequently, in the new year, Democrats and progressives had better be vigilant and prepare for an onslaught of contemptuous attacks from the Murdochian Empire. Their troops are amassed on the border and the rising sun is illuminating a determined and disturbing red dawn.