The old saying that “the enemy of my enemy is my friend” has been taken to heart by Fox News and much of the Republican Party. That is the only explanation for the ongoing love affair that is playing out on Fox News for the Russian dictator Vladimir Putin. Given an opportunity to compare Putin with President Obama, Fox News invariably comes out on Putin’s side. 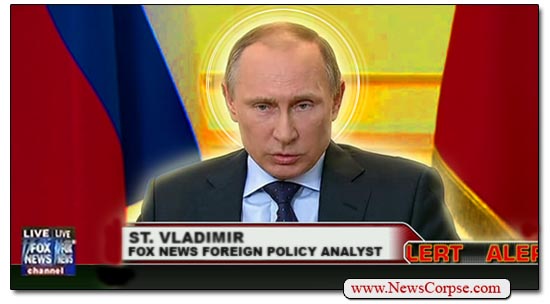 The latest example of this is Fox News host Jenna Lee who interviewed the Wall Street Journal’s Dan Henninger yesterday. The segment focused on how Putin is teaching the west a lesson that “fatigue isn’t an option,” a reference to the observation that Americans, after more than a decade of war, are tired of it and reluctant to commence a new confrontation over Crimea. In the course of the discussion Lee presented a scenario that favorably juxtaposed Putin to Obama and other American leaders:

“[Putin] had people openly weeping in the crowd. I don’t remember a time when any of us have been moved to weep based on a speech about America. That actually alarms me.”

Really? Because Fox News was one of the most ardent critics of Obama’s impact on his audience. They frequently characterized him as Messianic and looped video of supporters crying, and even fainting, during his speeches. They called him a “celebrity” president and insulted voters as having been swayed by his soaring rhetoric and appeal to emotion, rather than the substance of issues and policies.

Perhaps when Lee says that she can’t remember “any of us” being moved to weep, the “us” she is referring to is Fox News personnel. Certainly the only weeping Obama has ever induced from them is when he defeated Republican opponents at the ballot box – twice. Obama’s passionate oration is often belittled on Fox as theatrics, but the drama produced by Putin is seen by Foxies as powerful and patriotic. They are dripping with admiration for the Russian strongman and lament that Obama doesn’t emulate his persona and tactics. Of course, if he were to do so, Fox would turn and pounce on him for sounding like a tyrant.

Just this morning Fox strategic analyst Ralph Peters called Putin “gifted” and said that “He is a dynamic, powerful leader with a clear vision of what he wants and the west is leaderless.” Sarah Palin’s schoolgirl crush causes her to see Putin as “one who wrestles bears and drills for oil. They look at our president as one who wears mom jeans.” Sean Hannity was “humiliated for my country” after seeing photos of a shirtless Putin doing a butterfly stroke next to a picture of Obama riding a bike (which was a manly pastime when George W. Bush did it).

The infatuation that Fox has for Putin is palpable. But it is also opportunistic. They only admire him so long as they can convert their idolatry of Putin into disparagement of Obama. They tried the same thing with conflicts involving Syria and Iran, but after the administration’s success in forcing both countries to retreat from their pursuit of weapons of mass destruction, Fox News likewise retreated. And if Putin fails to achieve his goals in Ukraine, look for Fox to forsake their besainted one. But don’t expect them to give any credit to Obama. That would be sacrilege.