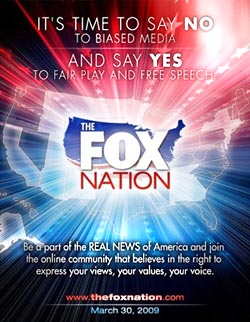 It was just a matter of time. With all of the white-hot, ultra-hyperbolic invective radiating from Fox News screens across the land, there was really no escaping the obvious end game. The usual suspects in the Fox Confederacy have been so filled with revulsion by the neo-Socialist path that they believe the country is on, that they can no longer abide nor accept it. So now Fox News is preparing to depart from the union with a fanfare, a blast of light, a loud swoosh and gong. And an advertising campaign.

On first viewing of this ad I thought it may have been a joke akin to the Colbert Nation. It begins by declaring that “It’s time to say ‘NO’ to biased media.” Was Fox News coming clean and denouncing itself? No such luck. It was just that old “fair and balanced” Foxian doublespeak. Instead, Fox was announcing the birth of a nation – The Fox Nation.

This should not come as a surprise. There has been much foreshadowing of this inevitable outcome. Glenn Beck proclaimed his intentions last month when he said:

“…don’t get me wrong. I am against the government, and I think that they have just been horrible, and I do think they are betraying the principles of our founders every day they’re in office.”

Not to be outdone, Bill O’Reilly joins in with his view of a nation that is coming apart:

“We’d love to see America become more unified, but I don’t think that’s going to happen any time soon. There’s a struggle going on to redefine America. And in 2009, that struggle will become even more intense.”

Beck, O’Reilly, and others at Fox News and across the conservative landscape, have been employing their airtime to turn Fox into a rallying point for rightist revolutionaries. They are recruiting “Culture Warriors” who will be dispatched to “Tea Parties” until they can shout victoriously that “We Surround Them.” The battle lines are drawn and the broadcast brigades are deployed and armed for combat.

This is an unprecedented, and frightening, initiative to use a major television network as an organizing tool for political activism. The sort of advocacy work normally done by independent organizations like MoveOn or Freedom’s Watch is now being conducted by a billion dollar media enterprise with a well known partisan agenda. No matter how much the right wallows in their delusions of NBC or the New York Times being mouthpieces for the left, those institutions have never set themselves up as coordinating committees for social movements.

But this goes far beyond conventional interest group pandering. There is a strain of hostility that runs through the conservative ranks that borders on the violent. Just last April, Rush Limbaugh was encouraging riots in Denver at the Democratic Convention. Now the Fox Nation invites viewers to…

“Be a part of the REAL NEWS of America and join in the online community that believes in the right to express your views, your values, your voice.”

Indeed, the Fox Nation will be a “community that believes in the right.” For a taste of what to expect, just take a look at the community that Fox already provides on their Fox Forums:

Tom BB: America’s enemies rejoice now around the world and in the US. Obama the terrorist is in charge.

Steven: Hell No! Obama is of the devil!

drwoo: MAY OBAMA’S WIFE AND KIDS BE THE FIRST TO BE BLOWN UP, BURNED ALIVE OR HAVE TO JUMP OUT OF A WINDOW ON THE 88TH FLOOR (SPLAT). MAY OBAMA REAP WHAT HE HAS SOWN> AMEN!!!

Jim: The Antichrist has arrived and is doing well in the White House. Say goodbye to what we all know as a free and God loving America.

Jim P: WHEN THE BOYS FROM GITMO GET HERE OBAMA WILL GIVE THEM WELFARE,SECTION 8 HOUSING AND EVERYTHING ELSE THE STUPID ASS PEOPLE WHO PUT HIM IN OFFICE GET. LET THEM LIVE IN DC. THEY WILL BLEND IN WITH THE REST OF THE DC RESIDENTS! HOPE ALL THE LOW LIFE AND WELFARE PEOPLE WHO VOTED FOR OBAMA ARE HAPPY. BY THE WAY, WHEN WILL THE TICKETS TO THE FORD THEATER GO ON SALE?

Don Brown: Obama needs to be checked to see if he has a 666 somewhere on his body.

It is not presently known exactly what form the Fox Nation will take (We’ll find out on Monday, March 30). As a self-described “online community” it could be modeled on MySpace, which is also owned by Fox News’ parent company, News Corp. But the purpose of the Fox Nation is not hard to surmise. It is just another brick in the great wall dividing Americans from one another. It will likely tap in to existing movements like Beck’s 912 Project and the Tea Partiers. Then these fanatics will be able to accumulate friends and form alliances. One thing is known for sure: There has never been anything like it from a social movement perspective.

Fox News has a large and faithful following. Their daily exhortations to rise up against the Socialist hordes they imagine are occupying Washington could be channeled into an army that is loyal only to the hallucinatory paranoia of the Foxian mindset. Beck, O’Reilly, and Hannity, don’t view themselves as commentators so much as they do as saviors. O’Reilly has confessed that he believes that he was “blessed with talent” and that he is “here for a reason.” Beck beseeches his viewers at the start of every program to “Come on, follow me.” Hannity leads into his All-Star Panel sermonizing with a preachy “Let not your heart be troubled.” An evangelical fervor literally drips from these would-be prophets like a poisonous sap.

So now Fox wants to start a new nation populated with believers and disciples. The nation that the rest of us inhabit is far too corrupt and sinful. It is infested with Secular-Progressives and far-left loons. There is no course left for the righteous, but to secede. The mysterious video that Fox is airing to promote the launch of the Fox Nation ends with this comforting enticement that seems deliberately crafted to appeal to lost souls:“Finally, a place to call home.”