America’s most notorious welfare rancher and domestic terrorist, Cliven Bundy, has revealed more about himself and his repugnant ideology. In an interview with the New York Times (video below), Bundy volunteers a bit of his prairie wisdom concerning the plight of “the negro”:

Exactly! Because who wouldn’t prefer being chained up and forced to work for no pay while being beaten, raped, and traded like the cattle that Bundy grazes illegally on land upon which he is trespassing? 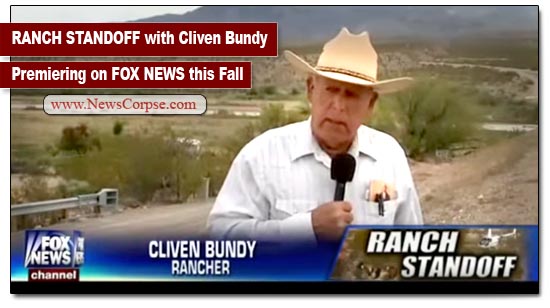 Ever since the Bundy affair became a cause celebre for conservative politicians and pundits, Tea Party and militia types have been heralding Bundy as a patriot and a hero for threatening to shoot fellow Americans who were performing their duties as law enforcement officers. It was only a matter of time before his revolt revealed just how revolting he really is. As a result, many of the people who were lauding him yesterday are backpedaling as fast as they can to disassociate themselves from Bundy today.

Rand Paul called Bundy’s remarks “offensive.” Nevada Sen. Dean Heller condemned them as “appalling and racist.” Republican National Committee chairman Reince Priebus said it was “beyond the pale” and “100% wrong on race.” Not surprisingly, Bundy’s BFF, Sean Hannity, has yet to comment on this turn of events. While it is commendable that some Republican leaders found the moral gumption to denounce this overt expression of racism, it’s interesting that they had no problem with any of this when it was merely an articulated threat to kill federal agents while using women and children as human shields.

Unfortunately, this newly discovered discomfort with hate speech rings hollow when viewed in the totality of the conservative mindset. In October of 2012, I wrote an article on “American Conservatives Who Still Think That Slavery Was A Good Thing.” It unveiled ten prominent right-wingers who feel exactly the way Bundy does. The list includes conservative icons like Pat Buchanan, Michele Bachmann, and Ann Coulter, explaining why African-Americans were better off as slaves. Nobody was denouncing these racists for their hateful outbursts at the time. So it’s hard to accept that they are genuinely disturbed by these recent comments when the same rancid bigotry is so much a part of their political character. Here are the ten slavery advocates from the article:

1) Pat Buchanan
In his essay “A Brief for Whitey,” Buchanan agreed that slavery was a net positive saying that, “America has been the best country on earth for black folks. It was here that 600,000 black people, brought from Africa in slave ships, grew into a community of 40 million, were introduced to Christian salvation, and reached the greatest levels of freedom and prosperity blacks have ever known.”

2 & 3) Michele Bachmann and Rick Santorum
Bob Vander Plaats, the leader of the arch-conservative Family Leader, a religious organization that opposes same-sex marriage, got GOP presidential candidates Bachmann and Santorum to sign his pledge asserting that life for African-Americans was better during the era of slavery: “A child born into slavery in 1860 was more likely to be raised by his mother and father in a two-parent household than was an African American baby born after the election of the USA’s first African-American President.”

4) Art Robinson
Robinson was a publisher and a GOP candidate for congress in Oregon. One of the books he published included this evaluation of life under slavery: “The negroes on a well-ordered estate, under kind masters, were probably a happier class of people than the laborers upon any estate in Europe.”

5) Rev. Jesse Lee Peterson
Peterson is a conservative preacher who articulated this bit of gratitude: “Thank God for slavery, because if not, the blacks who are here would have been stuck in Africa.”

6) David Horowitz
Horowitz is the president of the David Horowitz Freedom Center and edits the ultra-conservative FrontPage Magazine. In a diatribe against reparations for slavery, Horowitz thought this argument celebrating the luxurious life of blacks in America would bolster his case: “If slave labor created wealth for Americans, then obviously it has created wealth for black Americans as well, including the descendants of slaves.”

7) Wes Riddle
Riddle was a GOP congressional candidate in Texas with some peculiar conspiracy theories on a variety of subjects. His appreciation for what slavery did for African-Americans was captured in this comment: “Are the descendants of slaves really worse off? Would Jesse Jackson be better off living in Uganda?”

8) Trent Franks
Franks is the sitting congressman for the 2nd congressional district in Arizona. As shown here, he believes that a comparison of the tribulations of African-Americans today to those of their ancestors in the Confederacy would favor a life in bondage: “Far more of the African American community is being devastated by the policies of today than were being devastated by the policies of slavery.”

9) Ann Coulter
Known for her incendiary rhetoric and hate speech, Coulter was right in character telling Megyn Kelly of Fox News that, “The worst thing that was done to black people since slavery was the great society programs.”

10) Rep. Loy Mauch
This Arkansas GOP state legislator has found biblical support for his pro-slavery position. He wrote to the Democrat-Gazette to inquire, “If slavery were so God-awful, why didn’t Jesus or Paul condemn it, why was it in the Constitution and why wasn’t there a war before 1861?”

That was two years ago. Since then Tea Party types like Ted Nugent, Ben Carson, and Duck Dynasty’s Phil Robertson have joined their ranks. For Cliven Bundy to criticize African-Americans as lazy moochers on government subsidies while he is exploiting government subsidized land that he refuses to pay for, is monumentally hypocritical. And the right-wing enablers of his criminality should be ashamed of ever having supported him.

So Hannity is more “pissed off” for the poor branded wingnuts (i.e. himself) who encourage terrorism, rather than the actual victims of racial hatred. What’s more, Hannity spent more time condemning liberals for a false equivalency on racism than he did rebuking Bundy.

Also, Bundy held a press conference of sorts wherein he actually doubled down on his offensive views regarding African-Americans and whether they might have been happier as slaves.