Ever since Republican John Boehner took the Speaker’s gavel in the House of Representatives, he has presided over the most ineffectual Congress in history. It has managed to produce fewer bills, and work fewer days, than any Congress in modern times. And while achieving that dubious honor, they also held more than fifty votes attempting (unsuccessfully) to repeal or otherwise cripple the Affordable Care Act (aka ObamaCare). But despite bending over backwards to mollify the crackpots in his party, Boehner is already being attacked by fellow Republicans such as this one that mocked the Speaker in a campaign ad. 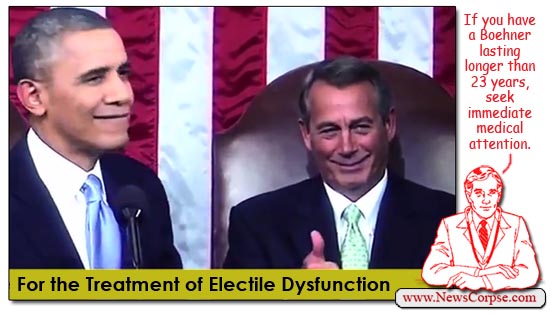 Today it appears that Boehner has decided that pandering to the extremist Tea Party minority in the GOP caucus is no longer as appealing as fulfilling his duty as a congressional leader and rescuing his legacy, and that of the institution which is floundering at record low approval ratings.

Boehner delivered a speech in his Ohio district where he made some remarks that are sure to rile up the right-wing fringe contingent in his party. The first of which will be received with a resounding thud by Teabaggers everywhere:

“[To] repeal Obamacare … isn’t the answer. The answer is repeal and replace. The challenge is that Obamacare is the law of the land. It is there and it has driven all types of changes in our health care delivery system. You can’t recreate an insurance market overnight. […] Those kinds of changes can’t be redone.”

This may be the first time that the GOP leadership has acknowledged that “Obamacare is the law of the land.” But Boehner went further to recognize the obvious fact that it is too late to simply undo the law. The health insurance marketplace, and the federal and state infrastructure that supports it, has undergone a transformation that cannot be unwound without creating administrative havoc and unnecessary harm to the eight million plus Americans who are now enjoying coverage that is comprehensive and inexpensive.

Boehner also addressed immigration reform, an issue that has been swirling around Congress for years. There has even been a bill that was passed by a bipartisan majority in the Senate that Boehner has refused to allow his chamber to vote on. However, his new comments suggest that he is ready to press ahead in some fashion to bring an immigration bill to the floor and get it passed. Although he still has to contend with the intransigent Tea-publicans about whom he said…

That’s a pretty harsh indictment of his fellow Republicans who he is calling out as obstructionists. Although in this case, he alone is obstructing progress on immigration reform which he could advance by simply scheduling a vote. But clearly he has been cowed by conservatives who oppose a resolution. As for Boehner’s description of the path they are on, in truth it is the path of MOST resistance. That’s the hallmark of the Tea Party’s anti-everything agenda.

Boehner was far from through taking direct swipes at the Tea Party that has made his speakership a nightmare. The divide within the GOP has deep fissures between the Tea Party and the so-called establishment Republicans. Competing factions of SuperPACS and lobbyists are battling for position in fundraising and primaries. And now Boehner is taking sides:

Without mentioning any names, Boehner is plainly referring to Koch brothers vehicles like Americans for Prosperity and FreedomWorks, as well as other notable Tea Party promoters like the Club for Growth, the Senate Conservatives Fund, and the Tea Party Patriots PAC. All of these groups have been instrumental in pushing fringe candidates in primaries that often have no chance of winning a general election. Boehner is understandably concerned about that trend as it could lead to restoring a Democratic majority in the House and the end of his reign as speaker (which may end anyway if the Tea Party members revolt and back one of their own in the next session).

In addition to the damage Boehner has caused by widening the gap between the far-right and the establishment, he also committed the sacrilege of acknowledging that something positive occurred during the Obama administration with regard to the economy. Boehner correctly pointed out that the deficit has been declining, a fact that wingnuts refuse to accept. Other economic good news like the stock market recovery and the creation of millions of jobs are similarly ignored – or lied abaout – by Republican politicians and pundits. So Boehner isn’t helping himself with this crowd by carelessly trafficking in reality.

Look for the Tea Party and their benefactors to wield a rhetorical shovel at the Speaker’s head. Sarah Palin, Glenn Beck, Rush Limbaugh, Sean Hannity, etc. will shortly commence to battering Boehner and demanding that he recant, repent, or step down. Boehner can count on Karl Rove and, perhaps, RNC chair Reince Priebus to provide some cover, but it won’t stop the bloody battle that is about to engulf the party.

If the Democrats are smart they will sit back and watch with bemused expressions and only contribute when they have some fuel to throw on the fire. Republicans are certain to provide that if Democrats are patient. The latent Cliven Bundys and Todd Akins are lurking beneath the surface of the GOP and they will emerge on their won in short order.