By now everyone with a pulse knows that Fox News is an unabashed mouthpiece for the Republican Party and their Tea-sotted radicalism. So it is not much of a surprise when they brazenly twist, mutilate, and ignore facts to advance their conservative agenda. However, every now and then the unparalleled idiocy of the Fox Nation editors still manages to boggle the mind.

When GOP Speaker John Boehner announced the formation of the House Select Committee to Shamelessly Politicize Benghazi, his GOP comrades immediately set out to profit from the affair by cravenly soliciting donations based on their starkly partisan scandal mongering. It was a nauseating display of disrespect for the seriousness of the subject and the tragic loss of American lives. Numerous media reports properly criticized Republicans for this act of political opportunism and greed. So what does Fox News do about it? 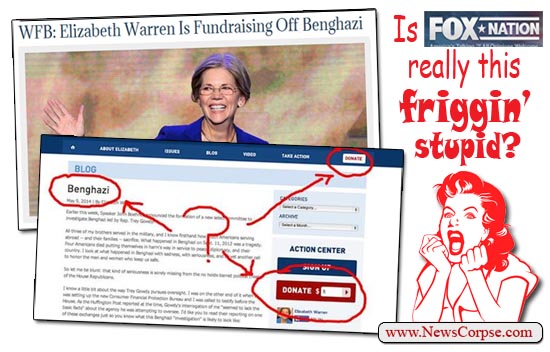 For more examples of documented LIES from Fox…
Get Fox Nation vs. Reality. Available now at Amazon.

That’s right. Fox attempts to turn the tables on their critics and accuse Democrats of similarly callous fundraising. But instead, this wild swing at Sen. Elizabeth Warren demonstrates the desperation and stupidity of the right, more than any malfeasance by Warren.

The example of alleged fundraising by Warren offered by Fox News, on their hopelessly lie-riddled Fox Nation website, consisted solely of an image taken from Warren’s website where she wrote a blog post about the new GOP Benghazi committee. Fox’s article was sourced to the ultra-rightist Washington Free Beacon, a Republican run and Koch brothers affiliated organization. On her blog Warren noted that she had previous experience with committee chair Trey Gowdy’s aggressive ignorance when he was a member of the committee that interviewed her with regard to the Consumer Financial Protection Bureau. On the formation of the Benghazi panel she said…

“The House GOP is on a waste-of-time-and-resources witch hunt and fundraising sideshow, shamefully grasping for any straw to make President Obama, former Secretary Clinton, or Secretary Kerry look bad.”

The supposed proof that Warren was using Benghazi to raise money was the presence of links on her website to a donations page. However, those links had nothing to do with the article she wrote on Benghazi. They are a part of her website’s standard template and appear on every page on the site. Any sixth-grader knows this about the Internet, but that’s apparently too high a bar for Fox News. 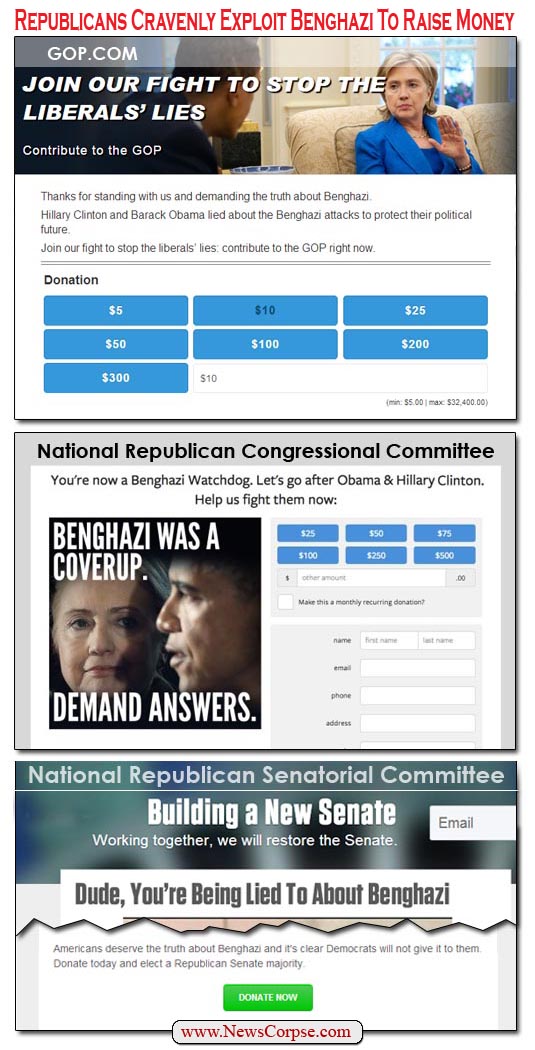 Note that these pages directly refer to Benghazi in making their plea for cash. For instance, the RNC page says “Thanks for standing with us and demanding the truth about Benghazi.” The NRCC page says of their donors that “You’re now a Benghazi Watchdog” (whatever that is). And the NRSC says to “donate today” because “You’re being lied to about Benghazi.” In each case the connection between Benghazi and the donation was flagrantly obvious. As opposed to the references on Warren’s site which were incidental and unrelated to her commentary.

Trying to assert that there is something in common with Warren’s page and those of the GOP says more about the desperation of the Republican Party to counter the criticisms that they so richly deserve. It also affirms the low esteem with which they regard their followers if they believe that such an ignorant argument can be persuasive. And if the leading Republican institutions think that their party members are this stupid, then what should the rest of us think?

8 thoughts on “Fox Nation vs. Reality: The Painfully Desperate And Stupid Attack On Elizabeth Warren”