Sooner or later someone is going to have to explain to Fox News that it is not the function of news enterprises to openly promote partisan political activities. This is a principle that they failed to observe when they hyped the Tea Party in Washington, DC, a few weeks ago. In the days leading up to the affair, Fox News actually had a their correspondent, Griff Jenkins, riding along with the Tea Party Express Bus and literally cheerleading at every stop along the way. Fox News also demonstrated that they do not understand the business of news when they helped to solicit money for the legal defense fund of Hannah Giles, the pretend hooker in the ACORN entrapment operation.

The most recent example of Fox News discarding professional ethics appeared on the Fox Nation web site this morning: 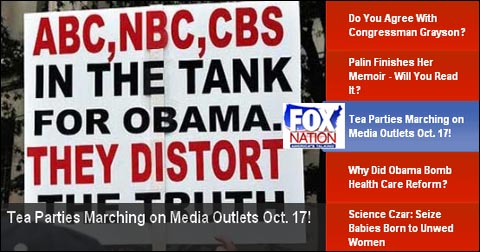 This featured item links to a web site for “Operation Can You Hear Us Now,” a Tea Party spin off that is organizing rallies against the media. Note that the link does not go to an article about the organization or the events it is planning. It goes directly to the organization’s web site. This departure from ethical behavior is multi-layered.

First of all, a legitimate news operation would not be helping to spike attendance at political rallies. Recently Fox News complained in an advertisement that their competitors missed the story on the 9/12 event in Washington. But what they really meant was that no other news outlet lowered themselves to promotion of it as Fox did. Now they are overtly promoting another right-wing event without actually reporting on it.

Secondly, this free publicity for a partisan protest is directed squarely at the news media (except, of course, for themselves). This means that they are now hyping public rallies against their own competition. Try to imagine how inappropriate it would be for Disney to use ABC News to incite the public to rise up against X-Men or other competing movie fare. That’s what Fox News is doing here, fomenting discord in the media marketplace to benefit their own brand.

I still don’t understand how the rest of the media can sit by idly as Fox trashes their products and even riles up a citizen revolt against them. It would be easy for the other news networks to return fire considering that Fox isn’t even engaged in the practice of reputable journalism. They should mount a campaign to sear into the public mind the facts about Fox: that they are no more news than the National Enquirer; that they repeatedly employ lies and misrepresentations to advance a political agenda; that their on air personnel are not journalists, but advocates; that they exist only as a mouthpiece for right-wing causes and the interests of big business.

If responsible news enterprises don’t begin to stand up for the ethical practice of their profession, then the worst elements of the business will continue to gain momentum and influence. The press will devolve into a factless forum for verbal fisticuffs and rhetorical rants. Even more so than it already has.