This summer has seen an abundance of animosity directed at America’s new president. Town brawlers congregated at local Shriner’s clubs shouting to take “their” country back. Tea Baggers descended on Washington with posters of the President as an African witch doctor. When we weren’t marching toward Socialism we were euthanizing our grandparents. And through it all there was an overbearing stench of racism. It was stench that emanated most noticeably from Fox News, who went to extraordinary lengths to deny it. They complained that they were vilified as racist just for disagreeing with a black President – who himself was a racist according to Glenn Beck.

So if Fox News was not race-baiting, what would you say these folks have in common?

Pictured above (left to right) are Barack Obama (President), Van Jones (former White House Advisor for Green Jobs, Enterprise and Innovation), Mark Lloyd (FCC General Counsel/Chief Diversity Officer), Valerie Jarrett (Senior Advisor and Assistant to the President for Intergovernmental Affairs and Public Engagement), and Patrick Gaspard (Director of the White House Office of Political Affairs). And their obvious commonality is that they are all patriotic public servants with records of distinction and achievement, right?. Oh yeah…they are also all targets of Fox News conspiracy mongers like Glenn Beck, Bill O’Reilly and Sean Hannity. Hmm…Any other similarities?

The Obama administration has fended off attacks from inauguration day when Chris Wallace (of Fox News) suggested that Obama wasn’t really president because the Chief Justice flubbed the oath of office. It’s been downhill ever since. But it’s hard to ignore the fact that most of the fire has been aimed at low to mid level African Americans in the administration. The faces above have been relentlessly assaulted by Fox News and affiliated conservative outlets. Fox has attempted to marginalize them as “czars” and smear them as either corrupt or bent on subverting the principles of democracy. Van Jones has already been driven from his post by the forces of a resurgent McCarthyism. But this time the McCarthyites are as obsessed with race as they are with Communists.

The latest victim of this campaign of character assassination is Valerie Jarrett, a distinguished professional woman with a resume that includes public service, law, finance and academics. 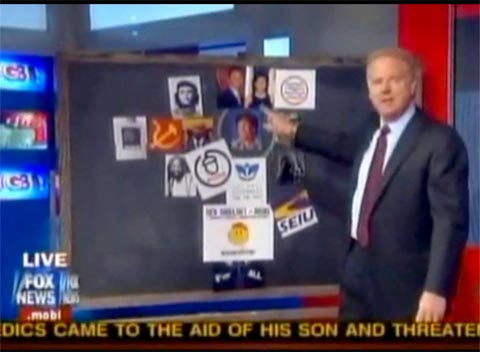 Glenn Beck is now focusing his arsenal of defamation on Jarrett with all of the classic Beck smears: communism, corruption, and guilt by association, whether or not any association exists. Beck rolls out his “black” board to connect dots that only he can see. He aligns Jarrett with Che Guevara, Mumia Abu-Jamal, and even Darth Vader. He accuses her of being the lynch-pin between the Obamas and manufactured scandals at ACORN and the National Endowment for the Arts. By the end of his ravings he places her at the center of an evil cabal that he dramatically asserts is cancerous.

Much of these aspersions are cast in the shockingly despicable framework of her support for bringing the Olympics to Chicago in 2016. This is also a goal sought by the President, who is personally lobbying for the games in Copenhagen with the First Lady. Most nations consider it an honor, as well as an economic opportunity, to snag the Olympics. But Beck, and others at Fox News, seem to regard it as evidence of villainy. It makes you wonder for whom Beck is rooting. Spain? Brazil? Why does he hate America?

It cannot be mere coincidence that most of Fox’s targets have been African American. Obama has some pretty prominent associates who are not black: Vice President Joe Biden; Chief of Staff Rahm Emanuel; Senior Advisor David Axelrod; Council of Economic Advisers Chair Christina Romer; Secretary of State Hillary Clinton; Secretary of the Treasury Tim Geithner; Secretary of Defense Robert Gates; etc. Yet there has never been a campaign against any of these, or other white staffers, even though there are many more of them and they have far more powerful positions. Fox pointedly goes after only African Americans who are much lower down the executive ladder. This is a situation that even Bill O’Reilly expressed concerns over when interviewing Beck last Thursday:

O’Reilly: Now, you’re hammering this guy Mark Lloyd, another Obama appointee. Is he a czar guy too? He’s the head of the FCC, right?
Beck: He’s the diversity czar.
O’Reilly: The diversity officer at the FCC.
Beck: He’s not the only one. Cass Sunstein and Mark Lloyd put together. That’s a dangerous combination.
O’Reilly: Sunstein’s a white guy, because I don’t want you to, you know, all black, and it’s the black…We had a black professor on just before you, thinks you’re…you don’t like the blacks and all of that.

How thoughtful of O’Reilly to consider the appearance of Beck going after all black guys. O’Reilly and Beck were clearly relieved that Cass Sunstein was white. They needed a token Caucasian to avoid the appearance of racial motives, and Sunstein fit the bill.

Unfortunately, as the photo montage above illustrates, there is still a vast over-representation of African Americans on Fox’s hit list. The presence of one or two white guys doesn’t change that. The obvious racism by the Fox crowd extends beyond the attacks on the administration. The crusade against ACORN is a blatantly racist attack on efforts to assist people of color with housing and voting rights. Beck has even called the movement for health care reform “the beginning of reparations” for slavery.

The truth is that it doesn’t matter what this administration does, the Fox contingent will find evil in it. If Obama personally found Osama Bin Laden and wrestled him bare-handed to the death, Fox News ranters would complain that Obama only did it boost his reelection bid and to sweeten the deal for his post-presidential autobiography. And in addition to finding fault with anything Obama does, they can also put any issue in a racial context. Then, of course, they will holler if anyone calls them on it. Their response to allegations of racism is that their accuser is guilty of reverse racism. But it isn’t much more than the old schoolyard taunt of “I know you are but what am I?” That’s the level of debate that is practiced on Fox News. It is a response that is just as childish and arrogant as one would expect from a network of overtly bigoted blowhards who still can’t believe that a black man is president.