As the midterm elections heat up this year, Fox News will begin to shift their attention from hysteria involving Benghazi to hysteria involving Democratic candidates and campaigns. Not that their fictionalized Benghazi horror stories won’t be a part of the mix, but the selection will be expanded to include more outright politicking.

The prelude to this coming torrent of anti-liberal electioneering was evident today in a Fox News report that warned that a “Shadowy Soros-backed group readies $40M war chest for midterms.” George Soros, of course, is one of the right’s favorite bogeymen to frighten their dimwitted audience into quivering subservience. Just the mention of his name produces Tea-filled goosebumps. As usual, though, Fox News presents a thoroughly dishonest accounting of the facts, while simultaneously concealing the sources of their reporting and their prejudices. 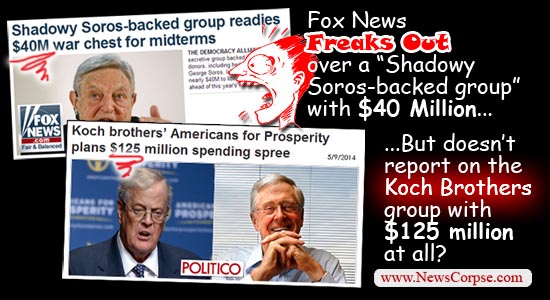 The first notable divergence from the truth is that the group that Fox News is referencing in their report is not a “Soros-backed” group. The story, by Lachlan Markay of the ultra-rightist Washington Free Beacon, is about the Democracy Alliance, an association of liberal donors who contribute to organizations that further their shared goals. George Soros is a member of the association. He is not a founder, a director, a board member, an executive, a staffer, and does not hold any other position of management or authority. He is merely one of about 100 members with no more influence than any of the others. By referring to the association as “Soros-backed” Fox is deceptively trying to convey that Soros has some special power or control that fits with their nightmare vision of an omnipotent Soros-run world.

Secondly, the revelation that some well-heeled Democrats are engaged in activities that advance the principles in which they believe is not exactly news. Nevertheless, it made headlines on Fox and was hyped as an “exclusive” by the drooling Beaconites. Much of the information in the story was previously known and published, including the names of the people connected to the Democracy Alliance and the organizations that received funding from them.

Even the dollar amounts were not particularly newsworthy. When it was reported by Politico just a couple of weeks ago that the two Koch brothers are embarking on a “$125 Million spending spree,” the $40 million dollars being raised by a group of more than 100 Democrats seems rather paltry by comparison. Yet Fox News goes into full-frenzy mode about the Democracy Alliance, and fails to report the Koch brothers’ activities at all. Additionally, it should also be noted that the $125 million Koch budget, which Politico described as “unprecedented,” is attributed solely to their Tea Party front group, Americans for Prosperity. They will surely spend far more than that through their broad network of conservative advocacy groups and think tanks.

Thirdly, the Washington Free Beacon is itself the creation of Republican Party honchos and is closely affiliated with the billionaire Koch brothers, a relationship that the Beacon is careful to keep under wraps. So the fake outrage expressed in this story about Soros must be weighed against the fact that the news entity reporting it is snugly in bed with the Koch brothers who oppose Soros. That kind of conflict of interest obliterates any credibility that the Free Beacon might have brought to the story.

Finally, the notion that there is a substantive equivalence between the philanthropic work of George Soros and the members of the Democracy Alliance, as compared to the single-minded self-interest of the Koch brothers is patently absurd. News Corpse recently highlighted the distinctions in an article that sized up the differences between right and left wing millionaires:

“For one thing, the Republican rich can usually be found bankrolling people and projects that benefit them personally or professionally. Thus the Kochs’ fixation on opposing unions and denying climate change is closely aligned with their exploitative and polluting business interests. Well-off Dems, on the other hand, commonly finance more philanthropic endeavors (civil rights, environment, aid to the poor) that aim to improve the quality of life without necessarily enriching themselves.”

This is just the latest example of the conservative media feeding on itself, as a Koch-associated news enterprise funnels its propaganda to Fox News, and all of them demagogue about how awful it is that a billionaire named Soros is helping liberal groups, without ever disclosing their own affiliation with the Koch brothers. It just illustrates how dishonest the right-wing wags are, and how shamelessly they will exploit their power to invent news stories and distribute them among themselves and other friendly outlets like Fox.